Most Italians take the traditional month of August off for summer holidays -- It's all part of our Quality of Life that we've come to know and love.  But for our furry friends, summer doesn't go so well.  I reprise a mix of my usual August entries below.  I hope the day will come when I won't have to post it.

Today marks the Official First Day of Summer for most Italians. It marks the day in which shutters go down, ‘closed for vacation’ signs go up, and streets go empty for the entire month. But it also marks the day in which over 300,000 dogs (600,000 by new estimates), sitting on death row, can no longer count on having their death sentences commuted just one more season. They didn’t know it, but since being given as gifts at Christmas, they’ve been living on merely borrowed time.

As a dog-owner, I find Italy to be the most dog-friendly country on earth; after all, they’re accepted in restaurants, stores, hotels, taxis, heck—I even took my little Trevor to concerts and Museums!  Each October 4th, in honour of St. Francis, churches hold special masses for your animals—in attendance.
But in what is one of the many contradictions of this wonderful place, when surf’s up, and the days grow long, well, Italians figure that it’s a good time to dump their best friend at the side of the road, hoping he’ll get ‘picked up’.  He usually does—by the front bumper of an SUV going 95 miles an hour.

The Italians (and they do not have the corner on this barbarian trait, as the problem is rampant throughout the Mediterranean), simply don’t consider animals as ‘pets’. They are beasts-- and no amount of unconditional love, company and dedication will change the fact that they can be disposed of as an empty pack of cigarettes--tossed carelessly out a car window.

While many of us animal lovers fret over the annual great dog massacre, some activists and City officials thankfully try to do something about it. Usually, by putting up poignant posters showing sad little doggies abandoned to meet their fate. This year, however, dogs got hit twice: no ad campaign was launched in Rome, and I fear elsewhere as well -- so dogs go abandoned due to the crisis & abandoned by those who might have helped sensitize the public to their plight.

Of course, they're hit a third time: when chained to lamp posts or criss-crossing major highways, before they starve to death or are mercifully hit.  Each year, abandoned dogs cause nearly 7000 roadway deaths (to humans) as cars swerve to avoid them. Wouldn't that have an impact on the rest of us?

As for me, August usually means running across motley packs of newly wild dogs: Poodles, golden retrievers, Dobermans, Beagles and every other mix of breed in between…it’s almost a charming scene right out of 101 Dalmatians, except for one thing: they don’t get saved in the end. 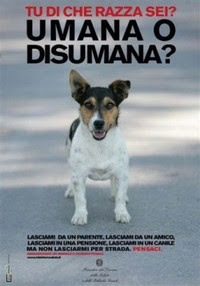 In 2009, controversial photographer Oliviero Toscani (from Benetton fame),
brought his talent into the never-ending annual campaign.
What race (breed) are you? Human or Inhuman?

The subtitle reads:
Leave me with a friend, a relative, at the pound, in a kennel,
but don't leave me on the side of a road. Abandoning a dog is a crime.

Please share this post.  This year, I did not see the usual ad campaigns anywhere - in a last-ditch effort to protect Man's Best Friend.

Why do so many dogs end up abandoned?

Does this happen in other countries or is it an Italian phenomenon? It's sickening...

From what I understand, (and I believe the Italian sources), the people trying to prevent this scourge seem to think it's because dogs are given as gifts, much like toys. And so, the families don't think of the responsibilities = daily walks, cleaning, and, eventually, what to do when you travel. When the kids get bored with their new toy, they simply let the dog go.
So, much of the info focuses on "I'm not a toy" type of publicity.
This is not an Italian phenomenon, as this is a problem across the Mediterranean basin: France also has a problem, Spain doesn't keep track, but, I'm sure it's there, too.
It's tied to the cost of putting a dog in a kennel for the month of August vacation.
Most places, especially if you rent an apartment, will accept dogs and even highway rest stops have dog watching corners now, so your dog doesn't die of dehydration in the car while you get a snack.
Italy is VERY dog-friendly -- which is why this disconnect is so abominable.

violetta and lisa asked 2 of my 3 questions! (great minds, i guess) so, #3, with the figure so high, do you think any of these families actually get another pet after once doing the abandoning act? or do they learn a lesson?
carol

The other side of the discussion is the fact that few practice sterilization on their animals and for the most part, people take them because they are cute for awhile but have no clue what it takes to be responsible and maintain an animal properly such as, boarding during vacations, regular vet visits, sterilization and proper diet. I rescued many dogs wandering the countryside when living outside of Florence and since 1984 nothing has changed.

Working in the veterinary field in the states I can say without a doubt, here in Italy the way animals are abandoned is epidemic and it seems to be one that is all over Western Europe.

I'd be interested in knowing about the USA: I read an article recently that it's a huge problem there, too. In fact, while the actual percentage may be low, the sheer numbers may be much greater?
Although you're spot on on the sterilization thing. That's a whole other blog entry!!!
I recall in Brooklyn, the vets sterilized strays for next to nothing if you were to bring them in and give them a home...

This just makes me ill... I visited the Torre Argentina cat sanctuary in Rome this Spring - I don't know how the numbers of abandoned cats compares with dogs, but the whole idea of taking a living creature into your home and then abandoning it is just unconscionable to me. I've got 3 cats, all of whom were rescued either off the street or from the pound (all in the U.S.), and I cannot even imagine abandoning them. They're like my kids...

Do these ad campaigns work at all? Do the numbers ever go down?

In Califoria it is becoming mandatory or already is that any pet adoption must show proof of sterilization. The counties offer money as well as an incentive. In our clinic, we did the surgeries at a reduced cost if they showed us the certificate from the county. I must add however that the cost of the surgery to us was the same, we also did not give out pain meds to low cost surgeries and many times the animals were not in great health and we ended up with many health complications as well as surgical. For the most part the program works and there are many many clinics performing $5 rabies clinics vs $20 as well as low cost sterilization clinics. The Neuter Scooter does a bang up business but they do not use a lot of drugs to perform the surgeries. Most people do not realize to spay a female, we are talking about an OVH! This is major surgery whereas the boys are just nip, snip and tuck.

Italian mentality regarding sterilizing males is ridiculous yet it fits if you have lived here long enough to know how macho they can be. What is worse, the pet store I frequent besides the multitude of signs for pet adoptions, many of which are purebreds, the store owners themselves breed purebreds! Hello! These are animals that get abandoned along the country roads every year and with the sterilization numbers so low, what the heck are they doing breeding????????

Sorry, this subject gets me going particularly after spending years in the large and small animal field.

This boggles my mind. As said Italy is dog-friendly and in some towns every second person has a little dog on a leash, how on earth can they pet it and dote on it for 11 months and then dump it? And then do they just get a new one in September or does the old one drag itself back starving to the doorstep? The numbers of people with dogs never seems to go down. It makes me furious and the refusal to sterilise cats out of some macho thing makes me want to go out with secateurs and sterilise some NON cats myself sometimes. Yes, I know, I am a bad person but the mentality makes me want to scream.

Francesca:
Animal-friendly!? I'm not so sure. You let'em in places, but you abandon them, PLUS the owners, in their only why of defying the Government, allow their beasts to sh-t all over the pavement,making walking in Roma an obstacle course.

Animal-friendly patriots or pinheads--you be the judge!

It happens in most of the places...Not in Italy specifically...

Happy to report that the situation (in general) is much better here now than it was when I arrived here a little over six years ago. Dog protection and pet/owner matching groups are very active. But the summer problem does persist, particularly in our pretty hillside villages.

I have noticed fewer dead dogs on the roads...am wondering if it's because many stay home due to economic crisis.

Throughout the year, however, near Pomezia, wandering dogs are a regular sight.