Making Oranges out of Orangeaid

I remember back in the day when I taught nursery school, and each year, we’d ask the kids, ‘Where does orange juice come from?’ And we were invariably met with, ‘A Can. The Freezer,’ or some other variant [ask ‘em where money comes from…and you’ll always get, ‘A Machine.’]. We’d then proceed to make fresh squeezed o.j. with them. In Italy, where bottled fruit juices are the next best thing to drinking the actual fruit with a pour spout inserted, you know exactly where your juice comes from. Nothing comes closer to ambrosia than this.

So, it is not without some controversy that Italy’s government decided that orange or lemon drinks (aranciata) no longer has to include the actual fruit juice. As a staunch capitalist, I think this is wise. But, as someone who loves the pure juices without having them tainted with sugar, corn syrup and all of the other insidious ingredients which creep into American beverages, well, it’s a travesty. And the outcry has been huge.

One of my favorite columns, Lapis in fibula, from Epolis, penned by a satirist who calls himself Chicco Gallus weighed in on the subject. Here’s his take: 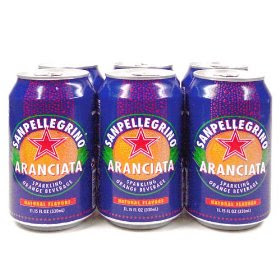 It is about to be permitted to sell orange flavored beverages without oranges, or rosé wines by simply mixing red and white wines together. It’s one of those curious laws that reenter into laws that everyone was happily living without.
I’ve never come across someone who was left horrified after having drunk an aranciata, only to be overcome with the horrible suspicion that inside, there might have been a trace of fresh squeezed something or other.
Foods proudly produced in order to avoid affecting those suffering from food allergies usually write, in bold letters, NO SALT!, Contains no glutens!, or Without fill in the blank. And obviously, they make you pay more for them.
Here we have instead the exact opposite taking affect:
It's up to the consumer to discover whether or not that which they just gulped is in some way related to what they perhaps originally wanted in the first place.
With the wine debacle, the issue is even more subversive; because, to make a rosé wine, you need an elaborate and costly system; cultivating the red grapes in a particular way. Mixing red and white wines together simply takes a split second.
In reality, however, this new way of making rosé even works in our favor: After all, up 'til now, to make a nice rosy wine out of your reds, all we needed to do was add a little tap water.
So now, we have to look forward to new permits of creative manufacturing, like, orange wine with no oranges, or fake aranciata rosé wine (all it takes is removing the fake yellow out of the fake arancione).
Heck – it could even turn into a new profession: not producing inventive beverages but, getting someone to drink them.

I don't really get the whole uproar: we're talking about orange SODA here. Now were they to say people could start selling orange juice without any juice, or orange soda without any soda, or an orange drink (not pop or soda or "bibite") without orange that could be reasonable grounds for complaint.

And the various San Pellegrino and co. that continue to use orange juice as an ingredient, which seems so popular? I think they would need little time to retool the labeling machines to add a little oval "Now! with 14% Real Authentic Orange Juice from Sicilian oranges" or such. They always have Christmas labels (which usually make it to the shelves of my supermarket's shelves sometime around mid-February, near the Christmas labelled potato chips) so I don't see the big deal.

Where have you found these bottled juices that are "the next best thing to drinking the actual fruit?" Nearly every brand here has 50% juice or less, the rest is sugar, water and often fructose syrup! They all taste so artificial. And the few pure juices out there are all from concentrate!

Italy, little by little, on its slow march toward capitalism at any cost, has changed...in some small way every now and again. And, you're right about the fruit juices.
I remember when you could get home-brewed iced tea in any bar. Now, it's the domain of Nestea.

Ditto on the fruit juices. But, you can still get the real McCoy from SANTAL, which is probably that 50% which you say...But, if you get the little-known brands of PESCA, ALBICOCCA, and even MIRTILLO (so thick, I add water), it's pretty awesome. Try the healthy ingredients section of the grocery store.

Skip the pre-bottled bar juices, although I am partial to PAGO fragola or Mirtillo.

As for your 50% comment...in America, it's probably closer to 3%. So, anything is an improvement!

Actually, I had no trouble finding 100% juice in the U.S.! I think that in Italy the problem is just that there's not much variety. Even the healthy "juices" I've seen are just juice drinks with lots of sugar and water. Same ingredients, but organic. I guess that's an improvement, though!

But about the orange soda, I don't get the uproar either. I mean, it's not a health food- it's a sugary, artificial drink. It doesn't require being made from natural ingredients.

Yup,
I agree with you on the juice in Italy. Ever since I was first there in 1984 I have loved the Albicocca, the one that comes in the glass jar. I often buy it when I am in Italy and drink it straight from the jar... in the street... (like a frickin tourist!) LOL ;-)

Yet another taboo is starting to break, however...people are actually putting lips to glass bottles (esp. those cute little coca-cola ones). Nowadays, and in the interest of polluting w/even more plastic cups, they ask if you want a cup. I must say, I drink the pesca in a glass jar straight from the bottles too. There is no greater joy.