Yesterday, driving the 10 hours from Rome to Lausanne, the radio was abuzz with the Big News from Italy: after France had passed its “Burka-Free Zone” law, a woman was fined for entering the Italian Post Office draped in a burka.  It was the hot topic even after crossing the border, and at all hours -- and judging by the phone calls I received along the way, the burka was ‘sulla bocca di tutti.” (THE hot topic) 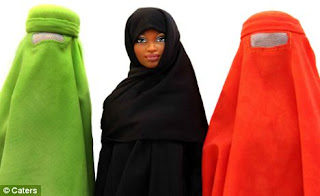 Picture of Italian-designed Burka Barbie launched last November in Florence.
Was anyone fined for the glamorization of the subjugation of women?
Before I go any further, let me just state for the record, that I think the burka is abhorrent to the nth degree.  But while I have a problem with our governments  interfering with how we dress, a friend in Paris and a few radio callers convinced me that the Burka is, truly a security issue.
[Although to date, one could lodge a convincing argument that it’s white guys in red ties and blue suspenders on Wall Street & elsewhere (think Parmalat, the Mafia, politicians far&wide…) whom have wreaked a bit more havoc on people’s personal security over the years – with their own ‘home-grown terrorism' – I mean, I’ve never had a run-in with a woman in a burka, but hey – it still could happen].
One stated, ‘The burka is a flag and means something much more, and it ruins our democracy.'  Another, that 'These women are not choosing to wear it freely', 'The practice is not writ in stone in the Koran'...
But, it was another who quipped: ‘If we were to enter a bank or post office with a ski mask and covered head to foot so you could not identify me as even male or female, would we be allowed to conduct our business before being detained?’  Now he got me.  He went on to say the law is not racist, and is equal for everyone.
And then, with that wonderful touch of things you only can find in Europe…we found out that you’re allowed to appear in a mask and coverings head to toe -- but only at Carnivale (they’ve yet to amend the ruling with a ‘Halloween clause’) -- provided that someone knows your identity and can vouch for you.
Costumes aside, back to the burka.  So, okay, I can handle the law for the above reasons.  But what I cannot tolerate is hearing some politician – in this case, Sarkozy, claim, “We are giving these women back their dignity.”
Personally, I believe we are making these women prisoners in their own homes – as they will never be allowed out of them - without their burka - by the overlords they call their husbands.
But, dignity?  If you really want to do something about women’s dignity, Sarko, then lets get near-naked women off prime time TV (and that includes your model wife), let’s clean up 12 year-olds' clothing choices, lets get the veline (showgirls) out of public office and off magazine covers for starters.  Then, lets get the prostitutes some help, the trafficking of women stopped, and the list goes on from there. 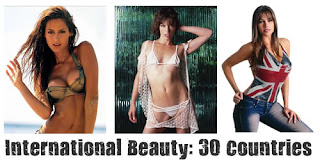 http://www.popcrunch.com/burka-barbie/
Watch this incredibly poignant and timely video done by two people I know in Milan, Il Corpo delle donne (with English subtitles).  It’s an unbelievable exposèe on women’s bodies in the media in Italy.  When the vast majority of Italian girls from 5 to 35 state that their dream is to become a show-girl (a TV stripper or pole dancer nowadays), we have a serious problem for all of society and one vastly greater than the estimated 2000 burka-wearing women (in France).
And then, let’s talk about restoring women's dignity.

Francesca:
Another part of this problem are Italian men and their macho image.

While I was in Roma in 2006 and living on the Via Licia in an air-conditioned studio apartment in the very hot summer, I used to watch "La Fattoria" and also Quiz Shows, with a famous compere was his something like Conte? All I remember was a girl that used to come on about half way through and read letters to the show and she always ended with Baci Baci!

The only joy about Italian TV is that it is live TV no tape so you see all the mistakes.

In fact, what Lorella Zanardo says is, this is very peculiar to Italy, but, she also says that all of this, the plastic surgery, the shots, the angles, are geared toward what? Getting a nice look from a guy?
Big deal.
They have lost their dignity, but what's worse, is the children are being ingrained with these messages all day long ('cuz the movies start at 9pm)...