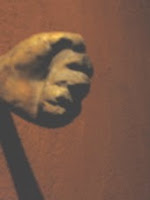 As anyone who's seen my full blog knows, Rome is famous for its 'talking statues'.  I regularly post updates (in the lower right hand corner) from Pasquino who, after getting spruced up, was one of the first to fall victim to the media 'gag rule' attempted by this government. [so my entries are now few & far between].
But in a country in which stately statues appear on every corner and atop of every edifice, in gardens, piazzas, palaces and pizzerias, it seems that things have gotten out of hand: an entire cabal of them decided to try and put some solemnity back into the country's political discourse, by staging their own protest.

So,150 statues, under the aegis of a spontaneously combusted 'Nessun dorma' committee, staged their own rigid protest; posting upstanding messages for all to see.  Their simple plea? That Italy stands firm and puts its best face forward, despite what images our governing body is putting out (ahem - in more ways than one).  As the declaration states, Italy's a country with women & men who work, provide for families, and don't strive to prostitute their kids at wild parties at Prime Minister's villas as in days of the Emperors of yore.  And so it is, that even the statues have gone stiff with anger.


Heard on the street:
Erected due to merit - Italy's body is not for sale - Petrified over all this rubbish - and of course, with a nod to the Sphinx..."Game Over".

See more photos here
Protests are being organized across the country this coming Sunday, to bring dignity back into the institutions of government and to stop the country from being derided outside its borders.