I'll say it before, and I'll say it again...Tutto il mondo è un paese - the sage Italian proverb indicating that no matter where you go, the story being played out is still always the same...Judging by the power-hungry politicians giving themselves perks on both continents (and probably everywhere, really) while in the midst of a crisis they were accomplice to...well, it certainly begins to stink with veracity.
So I was surprised when the Italian headlines were screaming out the story of the day (another American import - loud & non-stop fake coverage - or maybe it's an Australian import from the hysterical halls of Murdoch's Empire): 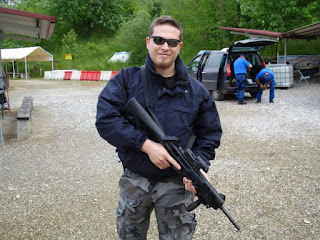 In Italy's case, Amigoni (pictured above) was on duty in Milan's Parco Lambro, to sniff out illegal trade & commerce. Seeing an unarmed Chilean man in the distance, he went into full Rambo.  The illegal immigrant had taken off in order to avoid being checked.  Marcelo Valentino Gomez Cortes was shot at point blank range right through the chest.
Our hero claimed that Cortes was armed and that he had shot him at a distance.  Fortunately for justice, Amigoni's own patrolmen testified that neither was true and, from the hidden shot shells found in the snow, Amigoni seemed to want to cover the evidence and his butt besides.
Sadly, this story reminds me of the over-excitable London police who shot (8 times) and killed the unarmed Brazilian immigrant, Jean Charles de Menezes just because he was dark-skinned and carrying a backpack [think about it: that description fits probably half the tube riders in London].
Yes, indeed, tutto il mondo è un paese.

Shame on you Francesca, your headline says it all. Your bias is showing.

There's no bloody relationship between Zimmerman and the others.

There is a relationship between Amigoni and the London Police.

Well, on duty police officers killing unarmed guys - vs - "security patrolman" doing likewise...Or, is it because he was beaten up by a 14 yr old? Well then, you're right.

Either way, they all have in common the over-use of arms with unarmed people (in defense or not as the case may be).

In Italy (and I'm sure in the US) if gunmen enter a jewelry store, tie up the proprietor's wife, and threaten the owner with a gun, and he shoots - and kills. The jeweler goes to jail.

Excessive defense response. What a joke.

Francesca:
In the case of the London cops and the Italian cop, they just killed an unarmed man.

Because Zimmerman was attacked and feared for his life he used deadly force...self-defense. What's more at least one witness bears out Zimmerman's story. Obviously, still to be proved. Though in Arizona, self-defense is assumed and the prosecutors must prove otherwise. I don't know about Florida.

Your opinion of Zimmerman is just that, not the law in America.

In the last case with the jeweler, maybe in Italy, no way in America...they'd give him a medal for ridding the world of another nasty.

So what's the joke?