Quick!  What do you think this image is advertising?
for those who don't know Italian, it reads:  Quality isn't for everyone. 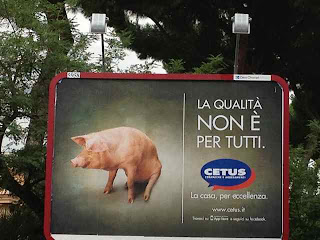 If you answered, 'prosciutto'.  You're half-right.
Only because, great minds think alike and that's what I thought it meant.

I thought it was a charming message that the CETUS company (reminding me of Parma's popular prosciutto purveyors, Citterio) was serving up to remind us all...Where's the Pork?

But then I read the tagline.  Your home, par excellence.

And I seriously didn't know whether or not to be offended, I mean, were they calling us pigs?
Or, totally amused because they were calling the politicians feeding at the trough pigs?
So, I settled on something much more juvenile:  must be a reference to the three little pigs -- except there weren't three of them sitting on their haunches there, and where were the bricks and mortar?  Despite my lack of visual cues, I was pretty happy with my brain synapses and knew I could make a leap in logic just like the best of 'em.

But then I looked at the logo.  Expecting it to be one of the ubiquitous real estate companies [who hold a singular place in my Hall of Fame for seriously lousy adverts], I knew I'd be satisfied.  Instead it reads,  Ceramics & Home Furnishings.

I kid you not.

So, if anyone out there can tell me the connection or, in reality, the non-connection between the pig and home furnishings, I'd be absolutely titillated to know...

As for my Advertising Age Ranking?
Since pigs are so smart, I'm going to give it a healthy 52 years.
After all, the ad is truly working its charm because it 'had me' standing there for well over a minute pondering such issues and now taking their message (note: term used loosely) out to the web.

Francesca:
If you have stand in front of an ad for minute to figure it out then it;;s swill....It sure ain't good copy hence lousy advertising.

My little video I sent you beat pants off that monstrosity.

Baha! That's a new one...I saw another tongue in cheek ad around Lucca the other day, I'm going to have to track it down again and properly document it.