Back in the 16th century, it was a fairly common theme in art to portray the lascivious old man trying to cop a feel off a young, fair maiden.  And, I think it's probably fair to say it was a case of art most certainly imitating life.  So it should come to no surprise that even in our day, it's still a familiar tale, told in movies, on the streets, in offices round the globe.  But what has happened over the centuries is, the revolting act can not only take place, but become fully expected and even promoted in modern "civil" society [I'm thinking Woody Allen, Morgan Freeman, Luciano Pavarotti, Jack Nicholson, Pippo Baudo, Flavio Briatore...].  In fact, over in Hollywood, if you were clocking it, the age gap (or the expanse) between the (un)sexy stars with guts and their hottie maidens is growing by generations, movie by movie [just compare The Great Gatsby or Summer of '42 with As Good as it Gets or Hannibal].  Women may be blinded by the sparkle of stacks of coins, but 9 times out of 10, unless you're a call girl (and even then), there's a significant Ewwwww factor in place.
So when Berlusconi, our Prime Lecher, ogled the young woman up on stage this campaign season, people just smiled, giving him the right to be as vulgar as possible; the next day, he'd just say he was 'kidding around'.  Unfortunately, for me and most of Italy, it was no laughing matter.


Here, Silvio asks the presenter from Green Power if she comes. Not good enough, he asks her how often she comes. And then asks what the temporal distance is from one to another, finally asking her to turn around again so he can check her out.  In his defense, naturally, it's because he "appreciates women and shows them respect".  But a journalist from La Repubblica got it right when he put black on white what all the rest of us want to see, instead of applause, smiles and laughter: 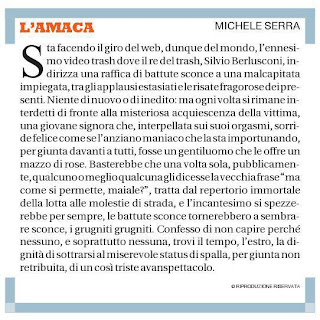 "It's going around the web, hence round the world, the nth video trash of the King of Trash, Silvio Berlusconi. This time, he delivers a flurry of indecent barbs to one unlucky employee; only to be met with enthusiastic applause and gaffaws.  Of course, it's nothing new nor heretofore unseen. But each time, we're left speechless by the seeming acquiescence of the victim; this time in the form of a young woman who, questioned about her orgasms, smiles happily as if the dirty old man who's put her on the spot was instead a gentlemen presenting her a bouquet of roses.
Just once, publicly, I'd like to see someone (feminine, to be exact) say, "How dare you - you pig!" A typical line that one uses with strangers on the street. The spell would finally be broken, the indecent remarks would return to be considered improper, the grunts left as grunts.
I must confess that I don't understand why no one (esp no woman) can seem to find the time, the flair, the dignity to remove herself from this miserable status of being a decorative, even unpaid, part of this spectacle."
As for the 'victim' in all of this, she is reported to have said later that she was not in the least embarrassed, and was "honored" and actually enjoyed the playful repartee'. So much for a morality tale.

"If gold rusts what shall iron do?"