I watched, stunned, from my balcony window as the streets started teeming with protesters, heading over to the American Consulate nearby. I was nervous my car - bearing  Michigan license plates - would be vandalized in a day that left “Fuck America” writ on the Consulate walls. In seemingly a matter of minutes, the compassion that the rest of the world had had for the United States was far less durable than those graffiti marks. Down went the American flags that had been displayed in store windows and homes across Europe. Gone were passers-by spontaneously hugging my dog donning his American flag bandana…Heck, gone was the bandana itself. Just eighteen months after September 11th, 2001 America, under its simpleton of a swaggering president, would stumble into Iraq and moor us in the deepest quagmire of our existence. Capturing hearts and minds of the Iraqis? If we had, they’d been traded in from those of the entire population of the rest of the world.

This usurper, who narrowly lost the popular vote, had become President of these United States. A mediocre student and “businessman president” (who was never successful in business) asked daddy to help him live out his boyhood dream of being town sheriff. What could go wrong?

Americans abroad know all too well the effects of America’s own decisions. So much so, each time there’s an election, headlines ponder the results if the entire world could vote right along with us. The Economist did as much during the Obama election (he won by a landslide). When Obama finally reached office, Italian kids in Obama buttons, t-shirts, and dog lore shared their love with the first family. A trip to Italy by Michelle and the girls with photo opps of them wandering out of the Pantheon and later bringing home a doggie bag from a top restaurant added to the panache -- and crushed yet another barrier for Italians; if FLOTUS could take her food back to the hotel, heck so could all the rest of us. Doggie bag shaming would end up in the Italian trash heap of history. But most incredibly, little girls across the continent would quip that when they grew up, they wanted to be President of the United States. Kids of all ages were engaged fully in the U.S. political process.

After Bush & Co.’s policies had not only tanked the U.S. economy, but along with it, Europe’s and most of the world’s…we breathed a collective sigh of relief - so cathartic that Barack Hussein Obama received an undeserved Nobel Peace Prize - his take home trophy just for showing up onto the world stage.

But this brief moment in history would prove to be as ephemeral as gelato under a scorching sun. It would not be long before women were being rated by their looks, added to political gatherings for eye candy, and fish-lipped hotties with bulging breasts and ultra-thin resumes were cropping up in European parliaments and city councils across the country. With their 6-figure incomes, expense spending and jet setting, they shined in the media spotlight - an Italian Miss Universe Barbie goes to Brussels. Parents were thrusting their daughters into the poltical lair, and girls not quite 18 were in line for boob lifts and nose jobs by the hour. It was an epidemic. 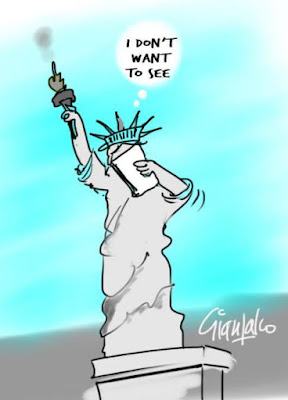 A media mogul, and the man who gave us desperate housewives stripping off their clothes on prime time became Prime Minister. There are plenty of posts comparing Silvio Berlusconi to Donald Trump but suffice to say, it appears that Silvio has bequeathed his personal How To List to The Donald directly. Berlus - errr — Trump even announced he would not take a stipend for his civil service. Silvio had done that. Kept his Milan Villa, check. Kept his beach hide-away. Check. Spoke highly of Putin. Check. Paid bribes (in the U.S. they’re legal) to make his troubles go away. Check. All Donald needs now is to adopt a little dog and we’d check that, too.
And just as beauty is more than Melania’s shiny complexion deep, the damage visited upon a generation of children being raised in this testosterone-laden brave new world, will be keeping historians busy for millenia to come.

While Donald and all his brashness and lousy sense of humour makes Silvio look like Gandhi (Beppe Severgnini says Churchill), this tag team built on media might and white blight are (almost) one in the same. Although divorced playboy Silvio did not even pretend to be on the religious side of things…he did take pains to line up a girlfriend to take out on public appearances, often dressed in white for the visual effect on voters.

Aside from the cosmetic similarities, hair-plugged Silvio hated being harassed by the media, comedians and random bloggers. He tried and succeeded on passing Gag Laws for bloggers and attempted a fire wall on journalists who might cross his path. He was embroiled in all kinds of lawsuits and claims (some his own) of ill repute. Berlusconi’s brother heads a newspaper that would smear anyone who opposed him, reaching right up to the very thin line of defamation but never crossing it (a right defended much more vigorously in Italy). Silvio flew in his own plane back and forth from Rome. Silvio never did make a blind trust (allowing his kids to run his businesses, as if, over a plate of pasta “How’s business?” might never come up in conversation.) But while calls for his daughter to run in his stead were made, even his kids had the good sense to stay out of politics.

In what may serve as a horrendous premonition (who says things in Italy occur well after America?) Silvio and his rubber-stamp parliament started passing laws that benefited his businesses or media interests, or more blatantly, kept him out of jail. In something that I am sure would not be below The Donald, he attempted at every turn to achieve immunity from all prosecution.

The demeaning of women rose to such a crescendo that the usually passive women of Italy came out in the millions to protest him - just for being Berlusconi. He would flippantly tell students, at the height of Italy’s brain drain, that to get ahead, they’d need to “marry one of my sons.” (only PYTs need apply). His bunga-bunga parties, underage harems, taped recordings, misogynistic comments and idiotic jokes…thankfully, finally garnered him his walking papers. He is far less a public figure - while Bush dumped his Texas ranch stage set, Silvio dumped his “fiancèe”.

But Italians have never truly had the racial tensions that other European countries have. Italy has historically been quite a welcoming place, very Christian (and not in the American hypocritical sense of the word). They now complain they’re being overrun with immigrants (they are), but in a country with 46% youth unemployment, there are no jobs for immigrants to take away. So Silvio never quite turned up the anti-immigrant sentiment to full throttle Donald.

Berlusconi may have been a pit bull with his adversaries, or maybe not (he is rumored to have paid many of them off) - but he was not a bully. He was personable. He enjoyed a good joke (albeit usually on women). But by the time he was heading out the door, we were disheartened to discover that little girls were now saying they wanted to either “go into politics or become a showgirl.” In Italy, post-Silvio, they were one in the same.

People always inquire, when they find out I’m American, ‘Why do you stay here?’ But now, I think they know why. The country that to all and sundry seems like a giant movie set, with its bad guys firing automatic rifles, its music superstars, its 'can do' attitude that would make Ferris Bueller proud…has descended into Fear and Loathing in Las Vegas. Italians, who have kept the American Dream alive for well over a century, have finally been shaken awake. From the lore of the "Uncle in America” posting dollar bills to relatives in war time, to the success stories of Grom gelato and Luxottica eyewear…This most recent election has snuffed out the pipe dreams of each and every Italian, no matter where they are and how many generations they've been there.

What will be the lasting legacy of a cast of white supremacists and bullies making policy for an entire nation? And what will be the ripple effect (or tsunami, rather) on those of us abroad? Finally, after these less-than-perfect Obama years and the regeneration of our economy, people were optimistic. Today, as I'm stopped in the streets by my African, Middle Eastern and Bangladeshi acquaintances, even Italy’s own immigrants feel the struggle ahead is palpable. And once again, I am overcome with shame.
The writing’s on the wall.


*Coming soon: what America can learn from running elections the Italian way

Lisa, give it up you lost.

I truly believe that to run a true democracy then voting needs to be compulsory. Americans argue that in a democracy you have the "right" to vote, but the outcome is not a true representation of all of the people unless everyone votes! Also the need to drum up voters with a "dog and pony show" would not be necessary. The only hope is that in 4 years time that more Americans will get out and vote!

Just more of the same pablum from the left since November 8, 2016, summarized as follows:

2. Stridently elitist articles backed up by cherry-picked half-truths written in a pitiful attempt to appear as universal truth.

3. Violence waged against anyone who dares disagree with them.

BTW, all this is part of the reason you lost and why you will continue to lose.