Italian Espresso vs American Coffee...What not to order on your next trip to Italy 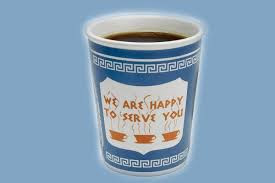 I grew up watching those Hogan's Heroes episodes ... they'd stand around...wishing for something hot and then spit out whatever it was they'd be served, usually coffee. BC Comics called it swill. With all that bad press, it's a wonder how any of us grew up to be coffee drinkers. And while I'll take an Illy Caffè Italian cappuccino over any coffee in all 50 states (okay...well maybe excluding New Orleans), when you happen upon a good cuppa...it's really not so bad.

But ask any Italian, and for as long as I can remember...they would wince at the mere thought of taking a sip from that horrid cup of "extra long" used bathwater...And this, I believe, is the true reason why Starbucks didn't make such a swift move into the Bel Paese. In all these years, I never really got into the down and murky dirtiness...to convince Italians otherwise. Who was I to explain that the real reason they were disgusted by Caffè Americano had nothing to do with American coffee? At all.

But then, I was talking to a friend's teenage son who had just come back from NYC. When I asked him what he liked about his trip he said..with a note of surprise in his voice, "I thought the coffee was amazing." While I also think his tastebuds were distracted from the idea of camping out on a plush sofa with freewifi at a a local Starbucks...versus downing a 1 inch high sip standing at a bar counter...I could see his point. Up til now, his version of Caffè Americano was basically the water that is left at the bottom of my Bialetti coffee pot -- after I've already bubbled up the contents and poured it into my cappuccino.

So after 25-odd years, I'm going to finally come clean for the Italian people, and...for all the unsuspecting American tourists who come to Italy - begging for a super long Caffè Americano:


No...An American Coffee is NOT the end result of an espresso machine that's forced to urinate all the leftover water, calcium deposits and murky espresso bean slime until it's a faint yellowish piddle flowing into your cup.

Baristas still seem to think that that's what we do in America. Just add water. Instead, American coffees are left to soak up their Burnt Sienna grounds...percolate, so to speak. [We actually get a bigger hit of caffeine than from a standard espresso because of that.] So..you try an American Coffee at your peril. You begin to beg for something that represents prehistoric swill.

Recently, an American couple breezed into one of the bars on the Appian Way and asked for a big ol' cuppa Joe to Go. They grabbed their Monster-sized cups (by espresso standards, anyway) and took off before I could warn them that what they ordered...wasn't quite an American brew. I found their (full) cups in a bin not much further along.

And so I've now come full circle on the Starbucks in Italy idea...Because, if you could actually serve up real American coffee...who knows? It might just catch on.

POSTSCRIPT:  It's 2018 & I just had the experience of ordering a 4.80 "Latte" -- Starbucks has only opened in Milano...and, as I predicted on my Facebook Page @IrreverentItaly , prices were going to be on the up & up -- It's started.

In any case, if you would like to make your own cuppa espresso –– check out the selection of the best of the best! Their team ground, tamped and frothed their way through market leaders to find which machines delivered expert results through an intuitive and user-friendly design. Check it out here
But, do the planet a favor...and stay away from the pods...per favore..

Are you saying that the impression in Italy was that Americans add water to espresso, to make a cup of coffee? And that in reality, Americans tend to percolate (which increases the caffeine content, as an aside)? And that American coffee might not be so bad, after all?

Just making sure; you know how eternally interested I am in this subject, too (truly). Incidentally I have a hard time accepting that Starbucks Coffee is typical of American coffee, but that's nothing new, either.

lisa
mi dispiace, but, like annie, i'm a bit lost at interpreting. it's also hard to believe that anyone would not become immediately addicted to a short bar caffe. there is no comparison. but is it true? starshmucks has landed in italia? it took long enough to adjust to passing an semi-attended panino shop next to a stuffed macdonald's. anyway, americans don't drink their coffee to experience flavor, nor do they sip their cabernet sauvignon for a pucker. we won't go into whatever they're calling olive oil.
oh, jezz. anik just slapped me on the head to remind of making dinner. be back soon.

Harm - Not an impression, in Italy that's what they do...just keep adding water until it resembles something more like tea made with espresso - it is godawful. So, yes, that's what they thought it was...until Nescafe' came to Italy and kind of destroyed it...although Nescafe' is so bad I wouldn't use it to clean my toilet. [Their Nespresso pods, on the other hand, in various shapes, sizes, and colours are another story entirely...if global warming is your thing...But they *are* divine ... And so is George Clooney, their spokesperson].

As for caffeine content, the grains sitting the whole time in your cup, vis-a-vis a shot of espresso makes for a heckuva lot more caffeine system-wide...even though most think that espresso is FORTE! (strong).

And you're right...Dunkin' Donuts is American Coffee. Not Starbucks varieties.

Albert - My very first coffee was a shot of espresso bought for me by a chain-smoking homeless guy in the Tuileries...(go figure). I drank it (for obvious reasons). Never had anything so putrid in my life...so, not sure but I'd say it's an "acquired taste".

So, after seeing Domino's Pizza Shoppes springing up around Milano....Starbucks every so often says they're coming to bring espresso to Italians. Supposedly, this time they're serious. I don't mind, but it means we'll all soon be paying 3.50 for our cappuccinos...in any random bar in the Bel Paese.

We still have one year until the first store will open in Milan to see how it goes, but from what I understand it won't be your ordinary Starbucks cafe, but something quite different, high-end.