If you can’t stand the cold…

Get into the Kitchen! As I write this, I am sitting at my desk, flannel sweatpants on, a wool t-shirt under my sweater, a hat on my head, and my winter coat over all of it. On my hands I don those kind of gloves where your tips are exposed, so they’ll only have to amputate the tops of my fingers once they’ve turned dark purple from the frostbite. 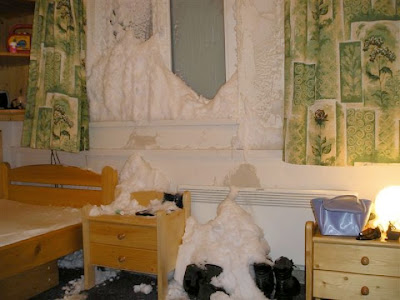 It’s not the incredible cold front that arrived in the Land of Sun from Siberia that’s the problem; after all, even global warming can’t stop that kind of air pressure system (although I wish it could). It’s the fact that it’s October 25th, and, the heat won’t come on in buildings in Rome until November 15th; the day the authorities have predetermined that it’s cold inside.

While this was a terrific measure during the ‘70s gas crisis to save money, I say, let’s abandon tradition (something very hard for our nostalgic Italians to do), and, maybe turn on the heat when the cold arrives. The system is so absurd, that at the tail end of winter, if we get a heat wave in April, the heaters are still pumping out, because they don’t go off again until April 15th. So much for Energy Conservation.

I remember coming down to Rome and finding my great-aunt standing, fully dressed with a hat and winter coat, in front of an open oven running full blast while she prepared her espresso; sometimes all four burners going, too. I used to laugh at the scene—but now make a mad dash to the oven each morning. In a portrait reminiscent of a Norman Rockwell painting, my dog is curled up right there with me; it’d be perfect if only we had a fireplace.

Thankfully, the powers that be, with an eye to their ever-aging populace, will no doubt decide that the heat can actually go on early, especially in schools and hospitals and the like. I’m sure just in time for the cold front to move on out.

thanks to our marble floors, it is usually colder indoors than out!
how often have you gone outside all bundled up to find that it isn't so bad out? then little by little you have to shed the scarf, gloves, hat etc.

but! on the upside, those marble floors keep us cooler in summer too . . .

thanks for the good laugh tucc.
c.

I've never forget Venice in winter -- Sherri and I practically had tuberculosis, the water levels were high (we had to walk on wooden risers) and the apartment we stayed in was damp and cold. Good times with Tucci still prevailed!