What's love got to do with it? Story of an Italian neighborhood

I offer an update on the goings-on in my little piazza...While the graffiti artists haven't found a decent tabula rasa to deface, there appears to be other problems which the concerned residents have taken into their own hands...
A public letter & petition has been posted around the neighborhood. Surprisingly, though, these sort of 'direct democracy' initiatives often get responses. In a country where we don't have 'town hall' meetings, well, first they petition the governing parties, then they go to the press, and if all else fails, well, they start occupying the train tracks. Let's see if my piazzetta becomes the Little Piazza that Could.  My update as of Aug 2012 below. 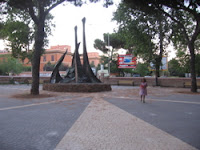 To: President of the XI Municipality, Sig. Andrea Catarci

The residents of the Ardeatina Quarter, in particular those inhabitants of the Largo Bompiani area, Via delle Sette Chiese, et.al., would like to express our sincere gratitude for what you have done in Piazza B. Bompiani. Through the restoration of this area, you have provided a pinch of beauty to a quarter that is considered by many just a thoroughfare between Ancient Rome [the Appian way is nearby, ndr] and neorealistic Rome, given that we host the nearby historic monument that evokes great pain -- the site of the Fosse Ardeatine [again, this is the place in which 388 innocent Romans were massacred by the Germans toward the end of the war, ndr].
However, if you will consent, there exists some room for complaint. This in the fact that, having given us a new piazza, the competent authorities have completely abandoned the project before its total completion.

A. You have installed a properly operating electrical system, complete with lighting and proper illumination of the entire piazza; but to date, we are still completely left in the dark.
They installed in-ground light fixtures, all of which have been smashed to smithereens by the hoodlums of the 'hood.  I wonder not only why they're made of glass, but why they are not solar lights to begin with.

B. We were promised that the monument inside (see photo in sidebar) would be totally restored--but still, nothing.


The monument was beautifully restored, only to find one asshole who has mucked it up with his graffiti, and others who have smashed in parts of it, just because they could.


C. Additionally, we ask to whom goes the responsibility of cleaning the piazza of the leaves, pine needles etc. which fill the entire square; risking that someone will slip and fall? The people who frequent the square? We don't think so.
[note: in Italy, there is often a problem between the street cleaners who don't touch the parks, and park people, who don't touch the street, or garbage, or whatever--leaving much of whatever it is that people or nature leave lying around, stacked up for years of neglect,ndr].


Cleaning seems to be going a bit better...Meno Male!


And so, Mr. President, instead of thinking of creating a 'Love Park'*, why not think of doing the right thing for all of us, and start by solving the serious problems that reach the entire quarter; and not just when you're interested in getting a post of command -- while you wait on the honest and hopeful votes of your citizens!

*The Love Park, is a place nearby, where, all of the transexuals and Eastern European sex slaves are lined up one of the main thoroughfares in all of Rome. Instead of solving the problem at the roots, this President thought we might as well create a sort of Park there where men can freely enjoy expressing their 'love'. I say, 'what's love got to do with it?'