There is nothing short of a revolution going on in the city that invented (or, in a nod to Da Vinci, shall we say, perfected), the automobile: Detroit. Basically, America seems to be looking toward ‘Old Europe’ for some new ideas in solving traffic jams. Now, that may come as a surprise to anyone who has spent hours riding Rome, Milan or Florence’s Ring Roads, but it’s true.

It looks like America is trying to adopt the idea of Traffic Rotaries, rather than the tired and completely botched idea behind traffic lights which pretty much bring traffic to a halt. Seeing that Europeans have never had a whole lot of respect for the traffic signal anyway, (well, it depends… that behaviour is inversely proportional to the enforcement agency’s zealotry in the matter)… America is looking at keeping cars on the move.
And this is great. What’s entirely American, however, in a country which cannot take responsibility for any personal behaviour, are the rules and signs governing rotary etiquette.

While in Italy, who gets to go first is a game of cat & mouse so totally evolved, that it's a modern update of this most basic rule behind animal behaviour: Darwin’s Survival of the Fittest. 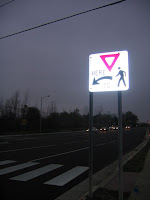 A few years back, they changed the law to bring clarity to the Who-goes-first policy. But in very Italian style, the law had as many exceptions as there are traffic circles and so now, it’s pure chaos with everyone involved in every accident claiming (rightly so) the precedence. I practice the “whoever’s on the right goes first” line of thinking. Others, the “whoever’s in the circle gets the right of way”. The problem is, you just don’t know who’s following what school of thought.
So, in the U.S., where life is governed by a CYA-philosophy, as you approach the new-fangled circle, you’re inundated with YIELD signs and bright yellow pedestrian crosswalks. Just to make the point clear, they add a few more signs – replete with arrows – to point out where, precisely, people might be crossing.

Note to all Italian drivers (including Americans) coming over the border: In Switzerland, you have to yield to traffic in the roundabout/rotary and they mark yield signs on the ground just before you enter the circle!

Excuse me, but is this the only way Detroit can get in the news in a positive way?