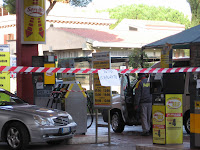 Yesterday, I walked out my front door and thought the apocalypse was upon us. Kilometer-long (and wide, after all, we’re in Italy) lines were forming in front of all the gas stations, even the one that sees only four cars in a week. Not having yet read the paper, I debated rushing to the grocery store to stock up on cans of pork&beans, but quickly changed my mind when I realized they don’t sell them here, and I’d probably end up with the Italian version of Spam instead.

So this 1970s end-day scenario was not due to OPEC suddenly turning off the spouts, nor was it that China decided to stock up on reserves ultimately garnering all the oil left on the entire planet. No, this was about a strike – but not of the gas station attendants. As they posted up their signs saying. “Tutto Esaurito”, they seemed to be still on duty. The truckers were on strike, alá francais, but here in the Peninsula, a strike of this caliber can cripple the country literally overnight. [After all, peninsula in Italian is penisola, isola or island providing the most accurate depiction].

But, playing out like a scene from The Sopranos, this strike took a strange twist not even screenwriters (when they’re not on strike) could think up: turns out the truckers were protesting to have more State controls, better safety requirements, and, even places to pull over for a quick pee, (although I doubt the latter is indicated precisely that way on their list of demands). Could this truly be the case? My Italian genes kicking in again, I knew there had to be something more to this—but what?

It would appear that what’s going on here is nothing more than an entirely modern update of an age-old tale, first brought to light by wise Old Aesop himself. It’s a case of sour grapes. The 40% of legitimate truckers are angry that the other 60% are getting away with illegal shipping, no scheduled stops, weigh-ins, and other petty inconveniences and making a few more bucks in undeclared pocket cash to boot.

So, since they can’t beat ‘em, they’re going to try and get the illegal shippers to join ‘em.

It’s true, you can drive from Trieste to Trapani and not come across a single police car. And, I’d be one driver who’d be quite pleased if they’d institute breath tests from the quantities of alcohol consumed along Italian roads, all before 7am…

Now, it remains to be seen if they bring in the Financial Police in droves and the problem gets resolved, or, if those same defenders of the law don’t simply increase their own pocket cash by turning a blind eye along the way.

I thought this was about the jump in cost of diesel fuel eating up any gains? Am I wrong?

DAY 1 of SCIOPERO: people taken by surprise, highways start to be blocked.

DAY 2: Cars lining up to get their gas before it's out. No fruits & veggies at the supermarkets, much to the satisfaction of the myriad farmer's markets around town. Streets appear a bit quieter.

DAY 3: Strike has been halted for talks, but now all the cars "lining up" are blocking all traffic, since the pumps went ON, and so the end effect is about the same.