The Italian Grinch-oni who stole Christmas

This morning, I awoke to what sounded to me like a fool riding up and down the street with his muffler off (a fairly common occurrence here of bravado). Instead, upon opening my shutters, I was horrified to see workers sawing down a magnificent pine tree, 50 years old and 5 stories high, right out of the middle of my cement jungle which encloses four buildings. That stately tree, which could have made it on Broadway (or at least, off-Broadway at Rockefeller Center), was obviously far too beautiful for this middle-class ghetto.

Or perhaps this entirely pagan symbol of Christmas was deemed too unworthy to last. All I know is that by noon, all of its branches were turned to mulch, and workers were chopping down the now bare trunk block by block. I don’t know about the Chis down in Chiville, but I can tell you, the last thing I felt like doing was sing.

Instead of my wonderful Michigan-like pine, I now have to face the eyesore of the vomit-colored building, paint chips and all, which it hid so nicely. And now, I'll have even more layers of extra-extra-large underwear hung out with no sign of embarrassment for terrific viewing (trust me, Victoria's Secret it is not). The only benefit, as we all gathered on our balconies to observe this despoiling of nature, was that my cute Fireman neighbor came out too; to close the shades probably not for the noise or sawdust, but so he would never have to look at that building again.

Going into the piazza, I said loudly, “I’d like to know who was responsible for such an act.” And, an elderly man (so as not to use my own epithet for him) piped up, “I put in the request. I just couldn’t sleep at night thinking one of its branches would fall and kill someone.” I couldn’t believe my ears. Well, with that kind of logic, I offered, why don’t we just cut all the trees down in all of Rome! Not to mention a stately pine doesn’t often lose branches. The fact that the place where it stood was closed to any pedestrian traffic, was too unbelievable for words. 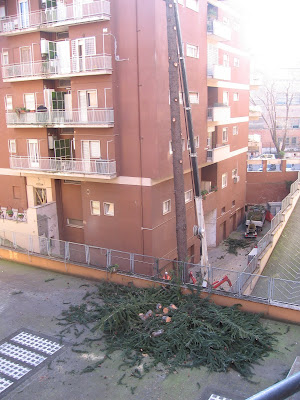 Now, I can tell you that that guy didn’t sleep at night for a whole host of other reasons, ranging from incontinence to the fact that he was riddled with insecurities since his own mamma undoubtedly passed away, and took his anguish out on the only thing he could…Mother Nature. But, what kills me is that one person’s phobia could decide the fate of hundreds of families, with no petition, referendum or word. In a city beseiged by smog, he singlehandedly pulled the plug on our respirator.

I know this sort of stuff happens the world over. But even more surprising was the reaction by my more (usually) militant neighbors in the face of simple bureaucracy: complete and utter resignation. ‘Well, it looks like the tree was causing problems’, ‘oh yeah, the noise was unbearable’, or, ‘I guess it had to go, you know, a branch could fall..."

I apologize for not being more in the Christmas Spirit—if I could just find city officials with hearts to grow two sizes today, well then, perhaps I can find a way to get a replacement tree, this time planted in my own back yard.

wait a sec.. did you say cute fireman?? qualify please with the appropriate adjective regarding marital status.
lol
c.
ps shame about the tree but have you ever been locked out of your apt and had to call the fire dept? one word---wow!

Totally cute, married with the standard single kid in tow. See my entry re: Vigili del Fuoco of Sept to know more about him...
burntbythetuscansun.blogspot.com/2007/09/vigili-di-fuoco.html

In the meantime, I lock myself out of my apt about once a month, but end up calling locksmiths who now have my number on speed dial. My hide-a-key keeps getting found & removed by industrious cleaners, and my neighbor is going to have me offed if I ring her bell one more time at 1am to let me in!!!

Where are those University of California @ Berkeley tree sitters when you need them?

It seems by your photo, however, that, since the work area around the tree is not cordoned off, they were not concerned about the deliberately falling sawed-off branches or trunk chunks hitting anyone.

Maybe the idea that it took only one person to make a change could be the impetus for other, more reasonable and responsible changes. Not likely, but I won't lose sleep at night knowing there is a sycamore tree outside my window.

Although I'll keep you all posted over on my side bar, a very kind and absolutely indignant neighbor surprised us all this Christmas morning by placing a gorgeous Xmas Tree on the spot of the very execution. Needless to say, she was not from the building in question.
We are determined to get a new one planted, but I'm sure it won't be 5 stories high.