And so it was, or, so it seemed to be*, that Air France has finally won approval to take over Alitalia (for whatever reason, it behooves me).

Charging right over those Alps and through the muck, just like Napoleon before them, here come the French to save the day. Sure, Air France is the only other company on the entire earth that knows what it’s getting into: both companies, after all, are suffocated by angry unions, pulled down by seriously over-bloated ranks, marked by surly service and destroyed by rampant strikes. Unsurprisingly, their’s was the only offer on the table. 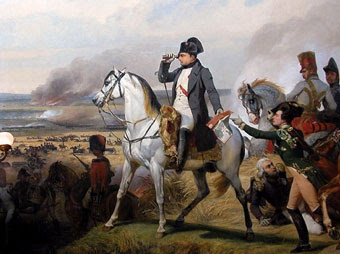 And just like those early battles alongside the Savoys so long ago, the first decisive battle is once again taking place on Novara soil, while they're busy fortifying the ramparts further down in Rome:

They’re building a multi-million euro addition to the poorly named Fiumicino or Leonardo Da Vinci Airport (take your pick); and sacrificing the best thing that ever happened to Italy - the even more incredibly ill-named, Malpensa (literally: Ill-thought) Airport. Despite its outrageous moniker, it is the engine that drives the entire economy, it is the saving grace of travelers far and wide. After all, it was not so long ago, that to come in & out of Italy, one had to take a puddle jumper over to Rome. This is their attack plan.

Capitulating to their new overlords, the Italians wasted no time in shutting down a third of the flights, just before tourist season. In a sick game of sour grapes, reminiscent of the way they ousted the Austrians in the 1800s, Italy refuses to let the Irish low-cost airline, RyanAir, gain a foothold on Italian soil.

With Milan’s fashion industry trying to maintain its competitive edge, while Fiat is making a comeback, while they’re building bigger and better trade show grounds, while foreign companies are still setting up their headquarters, the French – Roman alliance wants to put an end to it all by squeezing out its only northern gateway to business.

Perhaps the French should take note that, despite his numerous conquests, Napoleon in the end abdicated and was exiled to the Italian Isle of Elba.


*Incredibly, the guy whose stature, chutzpah & sheer arrogance is reminiscent of the Emperor Napoleon, Berlusconi, has just thrown a wrench in the deal stating he wishes now to take over Alitalia. To tell you the truth, it may be an improvement -- since he’s a Milanese – at least he’ll keep the airport running, if only for his own private jets (the modern day equivalent of the Bonaparte stables).

But, the Air France officials can supply a rebuff of their very own Napoleon who claimed, as he won the Italian crown: "Dio me l’ha data, guai a chi la tocca! "

[God has given this to me, and for whomever so may touch it, there will be serious trouble.”]

I love your blog, but in this case I have to disagree. Torino (FIAT) is just as well served in Torino by Lufthansa and other carriers as it is (or isn’t, rather) by Alitalia. MXP drives the economy? Ma dove? My father was a pilot for Alitalia and I agree with him that it has been the greatest displacement of funds in the history of Italian civil aviation. The airport is poorly connected, full of thieves, constantly under the threat of fog, and with its back to the wall because of Linate (I recommend reading about the KLM deal that went awry a few years ago). The people in surrounding towns prefer to use their own local airports to fly to Amsterdam, Frankfurt, and Zurich, rather than deal with the nightmare that is MXP.

Nevertheless, with this ultimate example of poor management on the part of Alitalia, it is time for the airline to die and be run by a company that has turned itself around over the past few years. To even compare AF to AZ is a bit short sighted, in my opinion. AF runs quite the tight ship together with KLM, having gotten its union problems under much tighter control than the Italians ever have. Other bidders were allowed to negotiate for the purchase of AZ: in particular, Aeroflot, Air One, and a number of U.S. investors. With the exception of Air One, it’s not their fault that they were not willing to cough up the money without obtaining significant control over the airline and its unions.

The few times I ever went through MXP, I had to take a bus to arrive either at the central station (even after they built a brand new train line!) or the Linate airport to make a connection. Moreover, the amount of time people have to wait just to receive their luggage makes the Bogota’ airport look like Hong Kong. Despite these shortcomings, the airport will survive Alitalia's latest tantrums.

People may not like the French, but there is no question that they run a much more efficient nation than our beloved Bel Paese. The case of Air France is just one example out of many.

Agreed, MXP is a huge sinkhole of money and the fog makes it unreliable as a true hub. I can't tell you how many times my flights into and out of MXP have been cancelled due to weather, even when the weather is OK in the rest of Europe. It is unfortunate but in a situation reminiscent of Swiss-LH, AZ can't afford to keep them both running as major hubs.