Visit Milan - A city on the Move

Back in Milano, it would appear the entire city is undergoing a facelift. And this -- well before Expo 2015. The scaffolding is almost all down off the stunning Duomo with its thousands of gargoyles. It only took a few years—and considering the 400+ years it took to build the thing in the first place, well, I’d say that’s nothing short of a miracle. The nearby Palazzo Reale is undergoing a refurbishing that will expand it’s already impressive show offering, and the trams running by have been repainted to their 1920s yellow & orange, adding a wonderful dash of color to a once grey cityscape.

Even the Train Station is getting a cleaning…What I once thought was simply a black building is now a dreamy cream. It’s a shame the Milanese deplore this fascist monument – it’s actually one of the spiffiest buildings in drab Milan. In fact, every now and again they try and cover it up with some godawful construction which ruins the entire approach from the front. 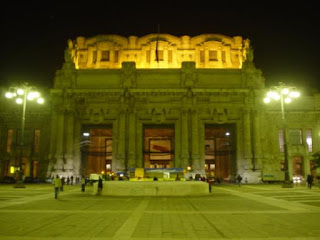 photo by Hanzibar
Years ago, they put up a thing which I thought was totally cool – a huge skateboard ramp on the piazza. Wow—now that was a City in touch with their citizens! After all, there are dozens of boarders at all hours on the huge piazza. Turns out, it was an immense lighting system -- so the hundreds of drug addicts out front could find their veins more easily. It was so horrid that even the City officials came to their senses and it was finally taken down. Yet no other city in Italy wanted the eyesore – even for pay.

Now, they’ve put up a totem about just as high and just as ugly showing us a countdown to the fast train or something. Considering we’ve been riding and paying for these trains for years, I would have thought the line was well-established by now. I wonder if the clock slows down every time the villagers take to sitting on the tracks to avoid the train from passing their way. 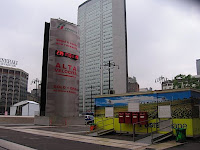 But inside, they finally took down the wall and steps from the central part of the building whose only purpose was to impede passenger movement. With that blockade, you could be sure to reach your train only after breaking a sweat from running the gauntlet of thousands of passengers trying to squeeze through the smaller side entrances. This was obviously the brainchild of the same committee that tried to instate an entrance ticket at one point.

While all of this is absolutely terrific news, of course, one could say that between the payoffs for putting things up and the bribes for tearing them down again, the Station is more than the gateway in and out of Milan – it’s the gateway for income distribution -- and a microcosm of the waste and deficit spending that one finds across the entire country. After all, wasn’t Milan nicknamed in the ‘90s Tangentopoli (Bribe City)??

I hope I misheard this, but Rome's new mayor in his first day on the job announced that he would tear down the absolutely stunning building - museum by Mayer covering the Ara Pacis. While opinion is subjective, I would like to think he'd spend his time tearing down true eyesores like all the abusive constructions all over the city and not one that is considered an architectural masterpiece.

hmm tucc. just wondering what your april list of 'tante belle cose' is going to include...
good luck coming up with it:-)
xo c.

Maier's Ara Pacis going down? Splendid! It was a genuine shock for us to find that white shoebox in the very centre of Rome. It's so pretentious - the architect wanted just to leave his fingerprint in Rome, it sticks out like a sore thumb.

Any new construction in any part of Rome is going to stick out like a sore thumb, unless you build in the late baroque style...I think these things are wayyy too subjective to be put up or torn down at whim.
But, I do like the shoebox metaphor!