One Down (Almost), Two to Go 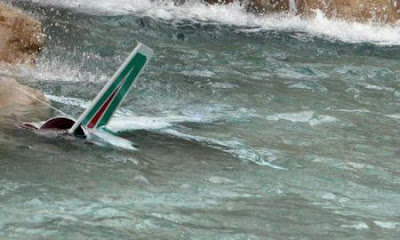 At the stroke of the (randomly fixed) midnight, the Air France-Alitalia deal was off the table. Both sides agreed to one thing, though; to abandon the talks and walk out in tandem, in disgust over a third party's improbable proposition (one that had nothing -- absolutely nothing -- to do with the financial deal, nor administration of the Company). Alitalia's President resigned in disgust, citing, "the only thing that can save Alitalia now is an exorcist." And as if on cue, today's paper ran a full page interview with a very busy priest engaging in such practices.
Perhaps he should have been at the table instead.

All of this melodrama, because of the unions, who have been feeding at the trough for decades now, are still gluttons for more.

Although my not-so-secret desire is to see Alitalia, lying belly up like an overturned turtle, rudders flapping in the wind coming off the runway, it would appear that the unions are inflicted with a serious disconnect. I hope they're all sent home to watch reality TV 24/7 'til the end of their days. Now that would make a good 'reality check'.

That leaves my last two monopolies, Agip & Telecom to see crumble under the weight of their own shoddy business practices. [Although I confess, I have ended my personal boycott of Agip Gas, as they have the lowest prices in town -- but it's still a matter of knowing which stations to avoid -- the ones with pumps running on speed dial. I may even provide you with such a list, but first I must talk to my legal advisors about the laws governing defamation.]

As for Telecom Italia, it is an entire conglomerate founded on the Mafia principal of extortion. They have been milking their customers since the day Meucci got a dial tone.

Instead of actually growing a business, they have been perfecting their decades-long practice of inflated bills, false advertising, shoddy telephones (no returns), worse installation, and gauging the customer by forcing them to purchase over-priced and faulty modems. Only just today they received an injunction for hiding 899 numbers (high-priced 900 numbers) in their internet service in order to bill clients hundreds in dialups, unbeknownst to them.

Up until 1994, customers weren't even able to view their call details (although Telecom seemed to know exactly how much you spent and where). Nowadays, they mask your calls by printing out only the first few digits ("right to privacy" they claim--ignoring the obvious fact that you dialed that private number in the first place).

Every time I get a poor salesgirl on the line trying to get me to switch back to Telecom, I explain that I won't rest until I see her Company owned by Deutsch Telecom. Heck, even Bolivian Telecom would be an improvement.
Let's see if this little wish doesn't one day come true.