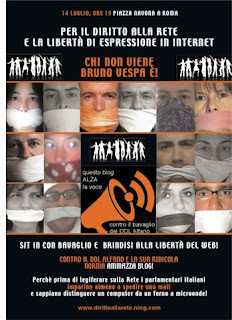 I meant to post this YESTERDAY, because it was the day of the strike, in which bloggers in Italy supposedly kept mum in protest of a new decree against freedom of speech and press which the Italian government will most likely pass. The reality is, I got my dates wrong, but I would have blogged anyway: I am fundamentally opposed to strikes of any kind, anywhere, and for any reason; especially ones in which -- errrr -- to oppose the government silencing you, you decide to silence yourself? Wow. That'll really make them capitulate.
In my opinion, bloggers and twitterers should have been churning up the airwaves, hacking into Alfano's Ministry, causing political unrest, and posting Alfano Sucks and other like epithets -- such as the ones they're going to try and 'police' 24/7.
So, what's the strike all about? According to the email a reader sent over (grazie mille), I'm not totally sure. True to form for the illustrious Italian reporting which they are trying so hard to defend, they sort of glossed over the WHY in the 5Ws which needed to be answered (Who, What, Where, When, Why). But, for your reading or sleuthing pleasure, I will reprint here the missive. I believe they are trying to get bloggers (you can call it the Anti-Beppe Grillo decree) to stand by their 'reporting', basically taking opinion (which is us bloggers' very currency) out of the equation.

On July 14, 2009, Italian bloggers will muzzle themselves in the Web as well as in Piazza Navona in Rome, where they will meet to protest against an Italian government bill (the Alfano decree) introducing a number of new rules which will limit the freedom of expression in Italian internet.
The so-called "obligation to rectify" imposed to the manager of an information
site (blogs, social networks such as Facebook, Twitter etc) clearly appears to
be a pretext. In fact such imposition, in terms of bureaucratization of the network and of very heavy penalties for users, shall make of the new decree an internet killer.
The practical effects shall be to cause independent sites and blogs to cease or to materially reduce their publications. The apparent intent of introducing criteria of responsibility hides the attempt to make life difficult or impossible for bloggers and users of shared sites (for example: You Tube...)
The fact is that bloggers are already entirely liable, from a penal standpoint, in the event of crimes such as insults, defamation etc: there is no need to introduce unbearable penalties for "citizen-journalists" who do not intend to submit themselves to the bureaucracy and the burdens contemplated in the Alfano decree.
The plurality of information, regardless of the media, internet, newspapers, radio and tv networks etc, is a fundamental right of men and citizens, on which democracy and freedom are based. The Alfano decree is an attack to the freedom of all media, from the major newspapers to the smallest blog.
For this reason we invite all Italian blogs and sites to a day of silence, on the
day in which newspapers and tv networks will also remain silent. It is a message of all operators in the media world, who give a shout out to the political world: "We do not want to be gagged".
We therefore invite all citizens with a blog or a site to publish this logo. Defending the press, the tv and radio networks, the journalists and the Web, we firmly defend the basic freedom of information and the future of our democracy.

Welcome to the anti-Berlusconi Gossip Pages decree. Or, welcome to Iran. Same thing.

I have been here more than twenty years, ormai, and my wife is very leftist, and still "faccio molto fatica" making any sense out of Italian strike theory/practice/usage/...

"It is the worker's right" they say, but then why does it happen so often on Fridays?

Francesca:
Italy has it's Il Duce,but just without the black shirts.

Let's have another Beppe Grillo, "Obey the sign," day.

Davide, you refer to Il Duce, but after visiting the show on Vespasian, I believe he's a bit more like Vespasian's second son, Domitian.

I have visited your blog many times, but this is the first time I comment. I enjoy your sense of humor and your point of view. Because I believe more people should read you, I have given you an award in my blog. No need to post about it, just interested in spreading the link love.
Cheers