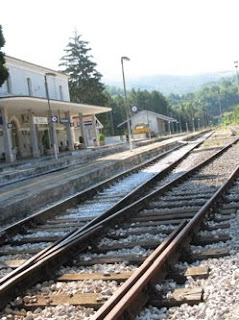 The US standard railroad gauge (distance between the rails) is 4 feet, 8.5 inches. That's an exceedingly odd number. Why was that gauge used? Because that's the way they built them in England, and English expatriates built the US railroads.

Why did the wagons have that particular odd wheel spacing? Well, if they tried to use any other spacing, the wagon wheels would break on some of the old, long distance roads in England because that was the original spacing of the wheel ruts.

So who built those oddly sized rutted roads? Imperial Rome built the first long distance roads in Europe (and England) for their legions. The roads have been used ever since.

And the ruts in the roads? Ancient Romans formed the initial chariot ruts, which everyone else had to match for fear of destroying their wagon wheels. Made for Imperial Rome, they were all alike in the matter of wheel spacing.

Therefore, the United States standard railroad gauge of 4 feet, 8.5 inches is derived from the original specifications for an Imperial Roman chariot. Thing is, chariots were made just wide enough to accommodate the rear ends of two war horses (or, two horse's asses).

And now, for the twist to the story:

When you see a Space Shuttle sitting on its launch pad, you'll see two big booster rockets attached to the sides of the main fuel tank. These are solid rocket boosters, or SRBs. The SRBs are made by Thiokol in Utah. The engineers who designed the SRBs would have preferred to make them a bit fatter, but the SRBs had to be shipped by train from the factory to the launch site.

In short, a major Space Shuttle design feature of what is arguably the world's most advanced transportation system was determined over two thousand years ago by the width of a horse's ass.

So, the next time you are handed a specification/procedure/process and wonder, 'What horse's ass came up with it?', you may be exactly right.

I don't know if this story is true, but I love it regardless.

Ok, the supplies' wagons, but Romans never used "war chariots"... even cavalry was odd (and used mostly as a recon corp and to harass fleeing enemies until the late empire) to the stocky, firm on their feet Romans.

War chariots. what does he think, we are some kind of Assyrian or Babylonian??

Caro Guido:
Regardless of the chariot type, the best examples are to be found in Pompeii between the stepping stones at the crossroads of the decumen roads and the cardinal ones.

Francesca, if in doubt about something on the internet you can check it out at snopes.com. This email checks out 100% except for the nit pickers then only 95%.

Francesca:
Have your communications both personal and business been rather difficult in Sept?

Blame it on Mercury being Retrograde till Sept 29th when it will once more go Direct, and communications will return to normal. I know mine have been awful.

Question to All and sundry: Where do you find the greatest number of Astrologers in one place at any given moment of time?

Answer: Why in the same place you find one of the best Central Intelligence Agencies of course.

Dear LEM,
i liked that one. ATB

Davide - in answer to your curious mind:

1. I seem to love Mercury Retrograde, things couldn't be better on all fronts, except my horoscope keeps predicting dire consequences!!!

2. Greatest number of astrologers is at a Mind Body Spirit convention in Glastonbury, England.

p.s. Snopes.com is an outfit fun by a husband/wife team. While I believe they probably do fairly good work, I do question how they find every answer to everything...
Having said that, they probably use the internet. Which could signify they perpetuate the legend, or, dis it without true factual knowledge, no???

You maybe right about Snopes but they do a pretty good job.

Francesca:
I didn't know that the convention of Astrologers in Glastonbury had a Central Intelligence Agency too.

The Intelligence Agency is one of the oldest in the world. The Astrologers are on permanent staff.

Now who could that be. This is a riddle.

Francesca:
I should rephrase the question: Where do you find the greatest number of astrologers in the world all the time?

Answer: Where you find one of the best Central Intelligence Agencies.

Now that's better. So where?

Well, my answer is China...but, I prefer to leave this space open to things Italian ... ciao carissimo.

Carissima Francesca:
Why the same people that have the greatest number of scientists and doctors of all types on hand.

If I point you whistle! You can probably see it from where you live.


I think that's Italian enough for you isn't it LOL!!!!


PS You can count on me to keep it Italian at all times.

A thought: What's the minimum number of phone calls it takes to get an international socio-economic question answered?


Answer: 8 Pope to Cardinal, to Bishop, to Priest and back. The CIA would love to be able to do that.

@Davide - who's counting??
Considering the sheer numbers of people in China, the fact that they wholly believe in Astrology, and have the greatest numbers of any category (fill in the blank)...I'm sticking with the Dragon.