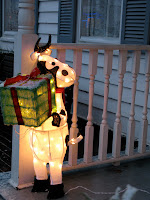 It’s not just the Bella Figura of ‘Southern Hospitality’, the scandals simmering just below the surface, and the Gentleman’s Clubhouses…there’s more that Y’all have in common – or, at least in what meets the eye:

Politics / I have no recollection of someone actually shooting down their opponent in Italian politics, so the Tennesseeans win this one, hands down…but, I suppose that the fist fights we often see on the Italian Senate floor do count for something.

Regional Cuisine / They are proud of their food, and I must say, even vegetables here taste like the real thing (unlike in most parts of the USA).

Immigration / Here, it would seem the ‘extra-comunitari’ abound, much to the chagrin of the Christian locals. Ethnic groups are accepted and rejected in equal parts.

Public Spending / Just outside our offices, there is a multi-million dollar sink hole. What started out as the big dig for a huge housing – shopping complex, ran out of money somewhere along the line. And so the hole is now one gaping eyesore on the city scape, collecting trash and runoff water. Tales of people ignoring building permits to create their own mansions, siphon off the local water supply, and perhaps pay the fines later are ‘sulla bocca di tutti’.

Male Chauvinism / It’s not enough that a woman lawyer I know was called a ‘whore’ by the judge (just because she happened to be practicing in his court). And although most girls still don’t want to be showgirls, striving for their M.r.s. seems to still be a driving force in southern society.

Cars / Not everyone can own a pickup, but I have found the love for fast driving and sort of macho road posturing to come part and parcel with life in the south. And with it, guns and hunting are close to follow.

Music/ Starting with Opryland, the sad ballads and folk songs still make up a large part of the repertoire of music here in the South – not unlike those ballads that are regurgitated each year in San Remo.

Manmade lakes / Some of the finest scenery in Italy comes from the gorgeous lakes that Mussolini ordered built from damming up the waterways. Tennessee boasts no natural lakes at all; but to see these beautiful sights, you’d never notice the difference.

Their own brand of Mafia / even Al Capone came from Tennessee, although he’d be rolling in his grave to find the house he built for his mistress has now been converted to a restaurant and tourist attraction.

---------------------------------------------------------------
And finally, I'd like to make a little update to my Tennessee experience.  After having worked as Series Editor for a Nashville-based Company, I was owed over $20,000 in fees and expenses. Like good Italian companies (although the owners of Linguality.com are decidedly American), they've simply decided to ignore this detail while continuing to bilk hundreds - if not thousands - of unwitting subscribers out of their money.  Years after stopping operations, the website is still up & running, they take the money - and don't send you the books.  Just like many Companies in Italy.  As they say in the Old Country, Caveat Emptor.

Francesca:
Not a mention of Dolly---shame on you! She's the greatest advertising the state has got.

At the beginning of the Iraq war, at a major D.C. shown for TV concert, she described her to most prominent features as "Shock and Awe." What a sense of self-deprecating humour.

No Tennessee is not like Italy, especially with pick-up trucks and guns. Ooooorah!!!

Please check your private email otherwise there's no point in my communicating with you.

I guess with Dolly = a cute & petit Valeria Marini, we've got that covered too!

Francesca: I checked out Valeria Marini and unlike our Dolly her assets are behind her...LOL!

We do actually have ONE (ONE!!!) natural lake here in Tennessee... http://en.wikipedia.org/wiki/Reelfoot_Lake

All the rest were made by TVA (Tennessee Valley Authority) as part of the New Deal, naturally...

Every time I drive through my neighborhood, I have the urge to stop and take pictures of the ridiculous Christmas decorations in some of the yards - I think you have to see them to believe them...