These pictures from the Dusseldorf Carnival were sent to me and, after some deliberation, I decided to post them.  What strikes anyone is the obvious...how we're viewed by the rest of the world...But, I don't really think that's the question.  I have a few of my own.  But first, the pics: 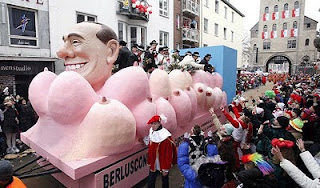 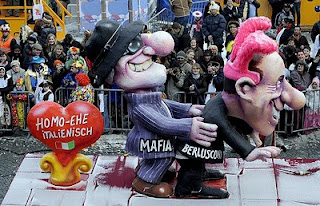 Secondly, I don't have anything good to say about our man Berlusconi, but, this government has succeeded in arresting and trying (and hopefully keeping locked up) the greatest number of mafiosi than many of his predecessors combined.  Now, I think all politicians must be in bed with the mafia, but I still wonder how these mass arrests have been going on to such a degree for such an extended period of time (could it be that it's just being reported more?).  Is it purely window dressing? I don't have the answer.

Finally, don't the Germans have any home grown scandals to take pot shots at?  They have to go all the way to Italy?  I'd like to have a look at the other floats going by...
I'm reading an outstanding book, L'Orda, by an even more exceptional journalist, Gian Antonio Stella, at the ways in which Italian immigrants were treated around the globe (his point: just like they are now treating their own).  From Switzerland to Sydney, these kinds of events (depicting a Prime Minister, no less) would, at least, in the day, have caused a diplomatic row.  I know that George W. Bush sort of opened the flood gates on picking on Heads of State (I know, I know, say what you will, Berlusca's NOT the Head of State, but, he's still the guy in charge...)but I think this is really over the top.

Maybe, if the Italians were really behind Berlusconi (and not in the above sort of way), they would start a boycott of Siemens and Lufthansa...it's either a good thing, the Italians don't take themselves so seriously, or, that they're really not such activists after all.

Francesca:
Firstly, most of the western world sees Italians as buffoons, as make love not war---surrendermonkeys. The British sexually are considered either homosexual or S&M. It's sort of expected.

Secondly, if you read Beppe Grillo, Mafia arresting is window dressing. He suggests there are plenty of Mafia in the PDL, including Silvio.

Fourthly, I think there is another possibility, they don't care.

LMAO.. The pics are hilarious. I am so sorry.. Berlusconi is not liked I presume?? But hey our ex-President had a guy throw shoes at him at a press conference. It can't get anymore embarrassingly funnier than that.

Francesca:
So check out the Times Online Comment that supports mine.

Ciao Davide, I had posted a reply but - sadly - had forgotten to hit PUBLISH!!!

1. I think Beppe Grillo tends toward hyperbole (not that that's not a good thing) / mafia arrests (if they don't all go free under some amnesty law) is still a good thing.

2. As Odissea states, GWB didn't insult anyone; what with his sentence-structure challenged ways, his cowboy posturing (our President wore a costume), and his vapid look and frat boy smirk, well, he opened himself and all of us gringos to a whole lot of ridicule -- that's what I mean by floodgates...