Let sleeping dogs lay..or, How (not) to travel with dogs in Italy

I recently took a 2 hr. train trip from Rome to lovely Spoleto and in the process, managed to get my rights read to me as a weapon-toting, harm-wielding outlaw.  Little did I know that once again, the rules & regulations governing traveling with dogs aboard trains are now more stringent than any gun law in any country, and even more severe than the penalty for chewing gum in Singapore. 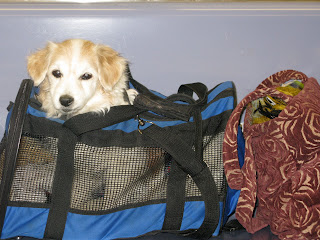 Trevor, that wild, foaming-at-the-mouth rottweiler wannabe as always, was curled up, sound asleep in his doggy bag.  And this was enough to alight the passions of the most somnolent train ticket guy.  I found out that:
1.    My dog was allowed on board in a bag (he doesn’t pay a ticket for occupying an extra space)
2.    Larger dogs – who may fit under your seat, no less, have to pay.
3.    Even though he’s in your bag, he must have a travel license, with a visit 24 hrs. prior to your trip by a Vet, or, at least have handy certification that his shots are all in order.
4.    He’s not allowed to travel in or out of the bag on any trains during rush hour (7am-9am) nor in the evenings.
5.    If you do not abide by any of the above, you will be fined €200 and forced to get off at the next station (thankfully, they let me stay on board)
After we discussed and debated at length the intelligence behind each of the above points - each clearly devised by the Veterinarian’s Association and none having absolutely anything to do with dogs and travel, I sat back in my seat.
To be accosted by a stream of ticketless beggars, pick-pockets or bag ‘handlers’ who don’t have even so much as an elementary school certificate let alone have their shots in order.  Even Trevor takes a bath.  And, whom, you are most likely to find in rush hours on every train from tip to toe – and, are never forced off at the next station, or in the odd chance they are, simply board the next train; ticketless & toothless (and probably with tetanus) once again.
Trenitalia does it again.

Oh my gosh...my husband and I are thinking of getting a dog and one thing I was wondering about was travel! I didn't know all the rules...yikes!

Francesca:
That's what you get with Silvio, Il Duce in charge...LOL!

Your lucky, we have to put with a borderline Marxist, as you know financially backed by one, G. Soros et al. The idiot has just sealed the fate of this country to be like Italy only worse. Stay there you're much better off.

You are obviously looking too American. How many times to I have to remind you to spray yourself and Trevor with "Eau de Paris Hilton"?

I agree with many of the observations of the trains and stations (it seems you luckily have never taken a late train on the Milan-Venice line and been subjected to sitting amongst a group of Brasilian "pleasure industry" workers on the Milan-Brescia tract, on their way to ply their wares [often with very few "wears"] and covered mostly with their abundant amounts of perfume which overpower the entire cabin), but to be fair to the FFSS, there are two points that actually seem pretty fair:

It has been obligatory for a couple of years now for all dogs in Italy to be registered with the local "anagrafe canina", so any dog owner should have the certificate, which doesn't really have much to do with vaccinations (it's nothing "extra" for train travel and doesn't expire);

The ban from 7-9am is only on Regional trains, which are the commuter category used principally by workers and students which fill up those trains almost to busting on most lines I have ever had to take at that hour of the morning. I couldn't find trace of the evening ban at all.

So it sounds like, as usual, the conductor was trying to show off his peacock's tail and scare the pretty American tourist with his power, or to impress you with his magnanimity.

@Linda: get the dog, ignore the rules, try to hide him/her when traveling (like I usually do), and wear low-cut blouses.

@Jacques...Hmmmm you may have a point there. And, I remember the Milano-Brescia & Milano-Torino lines fondly. I always felt I was in a Fellini movie

@Davide-not sealed our fate--there's no public option & it didn't go far enough!!!! But, I'll save that commentary for my next entry. But, you may be right, at least in Italy our only death panels are your doctors prior to the operation! he he he

I am so with you on this! My sister took her dog to Venice on the Eurostar in a bag and no one said a word. It's random law enforcement. So dogs are allowed only in the bag, in the middle of the day, and only if the have an orderly libretto with them? Where does it say that? How are we supposed to know that? I don't remember ever seeing it on the Trenitalia website and I looked!

Ok/So I looked at the website, and most of the above applies to dogs OUT of the bags...no mention of the 200 euro fine, however, nor evening rush hour.

Foreigners have to produce the doggie passport; but that assumes he's out of the bag and you've pretty much just entered the country (and, by the way, I don't see a sub-clause for Italian-born dogs)! LOL

It would appear he thought (naturally, with my accent...) I was foreign and could either:

1. cough up the cash
2. be impressed
3. settle up with him after hours (it would not have been a first, although at my age...)

In the meantime, they've set up a CLASS ACTION SUIT and want 50000 signatures as Trenitalia is denying people their right to passage...

Email to add your name:

and which also links to

So if your dog doesn't have his passport with him (or "anagrafe canina" certificate), it is considered an "abuse" of the rules, not an "irregularity" between an insufficient fare and the correct fare... so €200 minimum and no discounts for paying immediately.

Geez, how could you ever not have seen it, it is printed so clearly black on white?!?

@Francesca, sorry but I didn't even try to trace it in the English portion of the Trenitalia site, I could only imagine how it would have been described/explained worse than in the Italian. And you gotta' love those web addresses, they are soooo user friendly, just like the Trenitalia customer service.

But to be completely fair, I found the first link on the Trenitalia site the other day simply by typing "cani" in the homepage search box, and it was result number 2. Go figure that at least that worked kinda' decently.

Oh, and finally (I promise) the class action doesn't really make much sense to me. How did Europe get from "Liberté, égalité, fraternité" to "Life, Liberty, and the right to travel anywhere and anytime by train with your pooch along side you"?

Francesca:
As I said, stay in Italy, enjoy your sperm to the worm nanny state.

Our constitution has been broken by this abortion of a law. You have no idea what this means in the long run, both in terms of the federal government illegal intrusion on our lives and taxes. Stay in Italy.

Jacques - I didn't 'google it', I simply went to their own page labeled 'animali'. No other links, nothing of what you came up with, so thanks for the clarification!!!

Meanwhile, the real issue is the lack of cleanliness & maintenance on the trains (not to mention the over-abundance of undesirables who aren't forced to pay fines nor get out)...

Trenitalia is literally 'kicking the proverbial dog' rather than doing something about it. Blaming the dogs for the abject filth and fleas...

I have taken probably well over 5000 train trips in Italy. I have seen under 20 dogs in as many years. Could they truly be causing all these problems??? Thus, life, liberty, and the freedom of travel with your pooch...

Francesca, I agree, Trenitalia has managed that most difficult, almost impossible of feats: transmitting via web the exact same corporate philosophy and identity as is expressed in their physical presence - the dream of any and all multinationals that spend megabucks on corporate image specialist consultants.
Unfortunately the image burned in the back of the majority of the eyes in Italy of the Ferrovie di Stato (FFSS) has always been of Incompetence, Insufficiency, Magnamagna, and (another Italian M word describing dirty WCs on the trains).

As to the googling, your problem is obviously that you googled "animali" and not "cani"... those Ferrovieri think along a narrow and limited path, from which any variation is called "derailment" (and frowned upon). If you dont think like a Ferroviere, well... you're probably lucky, but you will never understand *their* logic just the same.

And since (particularly considering the statistics of Summer dog abandonment) owning a dog seems to be considered ever more a luxury, they go where they can milk the most... For every beggar or mendicant they manage to kick off, they earn nothing, even after filling out forms with the Polfer and Carabinieri and staying late, but one dog owner a week probably gets them a "premio produzione".

No logic, just follow the tracks to the point where they meet way down there... It doesn't make sense, it's just the way it is... keep moving along here, nothing to see. And as Davide points out, it could still get much worse...

OMG! This is hilarious. I am sure you didn't find it so while it was happening but the post you've written is funny and very well done. You remind me of myself. I can see just myself arguing each point with the train conductor. I haven't that exact experience but enough like it, when I lived in Italy, to where I found myself getting into those rather obtuse discussions.

yeah.
I tend to get more humorous the more crazy I become (thankfully). Go to some past posts that really made me crazy, like when they cut down the beautiful Christmas pine - at Christmas...
It's like how many types of discussions do you end up in like that with taxi drivers. Of course, we count ourselves lucky: in America they'd just kick you outta the cab...!