In the time of coronavirus, the Italian 'bella figura' has taken on new significance. No, I'm not talking about those designer facemasks coming out from Gucci or Prada. But the forms that have accompanied us during the crisis. Rather than simply asking a driver, "Where are you headed?" when the crisis hit, bureaucrats from the island of Lipari to Lodi in Italy's north (and the epicenter) quickly came up with 'the form'.
I have an entire chapter in my book dedicated to the 5-dimensional one-sided chess game that is Italian bureaucracy. In it, I describe how I believe these administrative contortions actually do a better job than the BrainWell app. They keep our Italian octogenarians as sharp as tacks.
And because Customer Service is also a challenge in the Bel Paese, every so often, out would issue an addendum to the previous form, essential to brandish should we have the temerity to exit our homes. Now that we're relatively free to roam in Rome, a new form accompanies our excursions.
I used to muse about the poor blokes in the back office of the Italian post office – the ones that took our 4 copies of receipts all duly signed for no apparent reason when we retrieved a registered letter. Who were these guys forced to match signatures with the i.d. cards that the poor clerk would take a copy of somewhere between the window and the break room (and from the time lag involved, stopping for an espresso along the way)? I'm certain they kept monks in monasteries well-employed for centuries. So who's checking your 'self-declarations'? I long for the days the cops could just pull you over and inquire, "Where are you going?" Because these forms - and, judging by the increase in traffic and pedestrians over the past week - are thankfully not putting a dent into our newfound freedoms. Just a furrow in our forests. 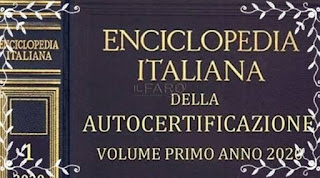 Collect the first volume of your Self-declarations!