I rarely watch TV, but, every now and again, I take in a favorite show or a good movie. Always new to the ad campaigns, I am usually quite taken by them (and, truth be told, I don’t have a working remote to zap the stations). So, I watch them.
You can imagine my surprise when the “university” to obtain a sort of mail-order degree actually advertised their curricula and their students using the voice of an enormous red monster who is quite popular on TV. Let me explain: he looks like a big red Barney, or a larger-than-life-sized Elmo, but talks even more stupidly.

I’ve never quite understood the Italians’ knack (or lack) for advertising. On most occasions, I think it’s the boss’ kid or even younger mistress who comes up with most of them. In a country known for its supposed ‘creativity’, the sleek, tongue-in-cheek ads almost inevitably come from a foreign multinational.

Their ads often border on racism, using stereotypes of foreigners that back in America would have protesters rocking the airwaves and calling for people’s heads. Women are usually fair game. A baby suckling at a naked breast to promote fruit juices (for you, not the baby). A Filipino housekeeper who can barely manage to speak Italian, let alone spread Philadelphia cream cheese on a slice of bread. A Samsung (Samsung!) ad for a camera, plastered over every single bus and subway in Italy stating “Shoot her” (this, in a country where a woman is killed ever 3 days by her lover, husband or boyfriend).

I stopped buying Grana Padano cheese after they showed a decidedly pregnant woman, cradling her protruding stomach, only to close in on it, and reveal that her beautiful round tummy was actually hot-branded with the Grana Padana label (just like on the enormous cheese wheels). Years on, I still don’t give them my business. And this was before tattoos were even fashionable.

But, my favourite for errr…poor marketing was when Luciano Pavarotti (may he rest in peace) was finally nailed for tax evasion. The guy was arguably one of the wealthiest entertainers on record – and certainly in all of Italy (if you don’t count Berlusconi’s past as a cabaret singer). It seems he neglected to declare a property in France or two on his tax forms. Doing the right thing, rather than going to jail (imagine what that might have done to his figure and his vocal chords), he admirably offered to pay up in millions of back taxes and was absolved. Next thing I knew, there was his picture all over nearly every bank window across the country – as the bank’s new spokesperson -- talking about what good investments you could make at Banca Monte dei Paschi di Siena.

Call me a prude, but while Americans go overboard, I still prefer to see Michael Jackson or Michael Vick lose their contracts with Nike and Pepsi, or women protesting outside Bloomingdales rather than be titillated by these sort of advertisements.

Ad below for English language course (admittedly, tied into the Gazzetta dello Sport) 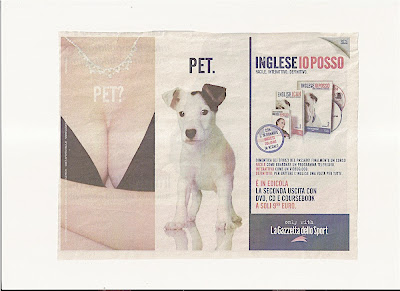 Just wanted you to know that I have listed you on my blog under Even More Great Women Bloggers at http://virtualwomansday.blogspot.com/2007/09/even-more-great-women-bloggers.html.

Be sure and stop by and say HI!

Have a wonderful day... and then some.

Heidi
Heidi Richards, Founder & CEO - The WECAI Network™
www.WECAI.org - “Helping Women Do Business on and off the WEB™”

ok tucc
you don't watch tv but how could you miss out on 'miss' italia. it was on tv for a couple of eves. so, i need to hear your take on it. write away!
carol

Well, I pretty much don't bother with Miss Anything type of contests, I think the dishes are pretty much done on their significance and power to women...
Besides, I'm still completely appalled about what Miss South Carolina said re: Americans & Geography.
Check it out: