The Devil Doesn't Only Wear Prada 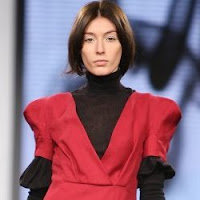 Anyone who has caught a glimpse of this year’s Fashion Shows being held this week in Milan must really be popping the Prozac. They say that when skirts are long, markets are up and vice versa. Well, I believe that the designers this year are mirroring the angst of an economy fast slipping into recession, a mortgage crisis, a healthcare, garbage and even an Italian government crisis. Take one look at the gruff models and there’s no reason to feel uplifted.

They figure, 'Hey, since no one can afford the clothes, let's just throw out those Fantasy Island storyboards and go with the Addams Family instead!' It's like pulling in your second string players for the last 20 minutes of the game.

There was a time when the fashion designers were giving us their version of sexy: little 11-year old boys. But even those boy-girls had interested pouts or even – god forbid – smiles on their faces. And of course, it appealed to their Japanese patrons.

But now, they’ve since swapped that innocent look for Amazon warriors looking like they’re psyching themselves up for battle. These pale-faced women are so gruesome, they look like Virginia Woolf – after they plucked her body out of the river (of course, without the bloating).

Considering that society likes to talk about First Wives being traded in for the new younger ‘model’, my position is -- if this is what’s on offer, there are going to be a lot of marriages remaining intact in the future.
I can’t imagine what it would be like to wake up next to one of these goons sans makeup and expensive jewelry.

At this point, I’m afraid to think what’s coming down the line in the Men’s Collections. Rapist Revisited? Because this view from Hell sure ain't pretty.

p.s. I acknowledge and accept that this post was extremely sexist. After all, as a feminist, I can only applaud the most homely women aspiring to and achieving status on the catwalks of Milan.
That said, why not make them look wonderful? Instead of like an episode out of Night of the Living Dead? After all, these designers are in the business of offering dreams and are the ones setting the bar for beauty.