[Ad reads: Bring your kids to Ikea, and we'll keep them between the balls. Fra le palle meaning similar to ball-breakers].

While Ikea ads remain -- at least for me -- The Gold Standard in Italy, with their tongue placed firmly in their cheek, lately, there's been a wind of change - albeit still only a mild breeze - based on some of the ads I've seen posted around town. This is good news.
In the last month, I've seen a number of articles on the downfall of Italy's ad business and its been a constant thread in dinner conversations (I swear, not of my own doing!). Spontaneous generation, I'd say.
I think this occurs every September, after Italians return from their holidays abroad and realize - even subliminally - what an eyesore ads are here compared to most places. [The verdict of late: it's not based on lack of resources -- poor Brazil reportedly has the most creative ads on the planet).

September in Rome and we were treated to this Back-to-School ad, 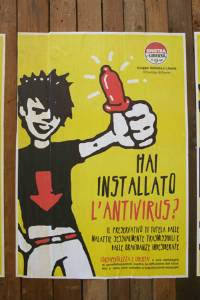 (although one could make the case that perhaps it'd be a tad more appropriate before the summer lovin' school break). So smart, obviously, it was not approved by any governmental committee. Sheer brilliance in its audacity, its ability to get you to read it, and probably, to think upon it long after you've passed it by. [It reads: Have you installed your Anti-Virus?]

So successful it was, like the anti-anorexia ads before it, it's now been censured.

And so we're left with what amounts to the brilliance of political action committees. From the PD, black ads seemingly marking the end of days, state simply, "Ciao, Ragazzi". Wow. That's enough to get me to motivate - politicize & demand Change.

Back in 1997, as my late wife and I, came through the tunnel from the airport and into Zurich proper there was a similar sign that translated read. "When you take them off (clothes) you put it on."

I must say I think both are very effective and for an American hilarious. Cleverly funny in themselves and even funnier thinking about the public's reaction if such ads were to be on billboards in the US.

have you seen the new billboards for the smart car--the ones with lyrics? not provocative, but funny and clever.

I'll never forget the one which was all over the buses here in Milan. Here it is, I managed to track it down on the www: http://foto.virgilio.it/gallery/foto_dautore/q_t/oliviero_toscani/Trasgressivo_Oliviero/index.html,zoom=3226.html

Then there was the one advertising jeans, I think, which was all over Milan - you could see that the wearer was, er, quite exited about his new duds...

Don't think I could unearth that ad, can't remember when it was.

Alex - unbelievable. But, at least it's in theme...How about the same picture, but selling peach juice instead?
The caption? La bellezza della Natura.

I boycott Grana Padano ever since their sickening ad of the 9month pregnant woman branded with their symbol on her large tummy.