Hillary Clinton asserted (somewhat unsuccessfully) during her bid for America’s top job, that “Perhaps it takes a woman to clean up all the messes that the men have gotten us into.”  And from natural disasters to war zones and through economic crises, she is right on.  Traditionally, it’s been the women to pick up the scattered pieces, raise the children, and grow communities.

Coming back to Italy, it would appear that things have gotten so out of hand that even the Italians are looking at an A-list of women running in elections across the country.  After seeing so many women in the USA as on talk shows, talking business, the economy and politics, I thought for a moment all of the posters were like hazy mirages from my jet lag.  Turns out, I was wrong. 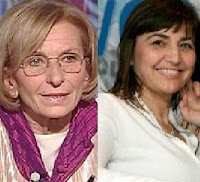 Running for the Region of Lazio's governorship (or Presidency, I haven’t quite worked it out) of Rome & environs, are two welcome faces:  Emma Bonino and Renata Polverini.  It seems they battled to the top against a few others, like Loretta Napoleoni and Paola Binetti.  I’m not sure if this is some weird fad, or if in Italy, women finally are going to have their say.  But either way, I just hope that the ladies are here to stay.

And although Polverini is half Bonino’s age (and experience), do I dare say it, we may have Berlusconi to thank for this unlikely turn of events?

In the worst case, at least party officials can rest a bit easy in the knowledge that they won’t be muddying the party name – being found out cavorting with transvestite prostitutes or underaged call girls around town.