Dogs in the USA: Unwelcome

There is one person* who is truly grateful to be back home in Rome and that’s Trevor-the-dog. Sure, what to the rest of us would appear (justifiably so) as mini-obstacle courses as you walk down the sidewalk, and pock-marked palazzi stained by jet streams of spray, for a dog, it’s pure heaven. 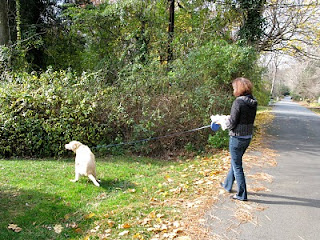 After spending 2 months in the USA, Trevor is determined to make sure his scent is left on every curb, car tire, tree and tree stump far and wide. America may have a love affair with dogs, but you’d never know it – canines are truly to be seen and not smelled.

In the USA, there are approximately 77.5 million dogs; that’s nearly 30% of the population and with 39% of U.S. households owning at least one dog.
But, you’d never know it. People walk their dogs, but, the dogs are not allowed off a leash, so they can’t roam the huge park – it’s like inviting a dehydrated person to a pool and then not letting them jump right in.

In the city, every tree is fenced in so no peeing allowed.  While in the suburbs, dogs can’t pee on trees or in yards, even if said yard contains a hydrant. People would rap on the windows if they so much saw my dog sniffing the grass on their lawn. I personally think Trevor spent two whole months ‘holding it’. Not only that, I still cannot tell how it is that large dogs in the suburbs get to run – it’s simply not permitted. We are probably modifying their genetic makeup with this practice; soon we’ll have the dog equivalent of penguins.

Trevor’s elation of his newfound freedom of being allowed into restaurants, bars and stores is truly palpable. What a treat! He gets to eat the crumbs left by the croissant & cappuccino eaters and beg for more. Many people may find this practice barbaric, but I still attest that dogs are as dirty as the bottom of your shoes; although that’s not to say that I’d want an Olde English Sheepdog drooling on my dining table.

And so, you’d pass people – in cities or in the burbs – talk about your dogs, admire them, but never allowing them to leave their mark, so to speak, even if it was on the trunk of an old oak tree. It was like a fashion runway of pets; dogs here and there, making their turn and taking off; not a single one stopping to smell the newly baptized roses.
They couldn't: they were as dry as a dog bone.

People like their lawns without the dead yellow spots from the caustic pee. We do have the problem here, too, of people who do not take responsibility for picking up after their dogs on their neighborhood walks, hence the rapping on windows. You don't have a yard, so I'm not sure you can imagine working in your garden only to find the nasty surprise of stink bombs from both dogs and cats while trying to make a pleasant spot for the plants you love or want to eat.

Ya know, they do have dog parks where the dogs are able to run, jump, sniff, pee, poop, and everything else dogs love to do alone or with other dogs, but in a safe, fenced-in area.

And keeping your dog on a leash usually keeps all parties safe, seeing as how it is your responsibility to keep your loved pet under control. I know, Trevor wouldn't hurt anybody (really!), but how many times have you had to yank Trevor out of the path of an oncoming car or moped? Or grab him away from some other dangerous or enticing encounter? Aren't you glad you had that control? Are there times you let him "run free" and something happened to him?

Francesca:
This is one blog I can let loose on...LOL!

Thus they create a walkers obstacle course with their dogs where ever you go in Rome or other Italian cities.

They dream of grubby civil servants having to clean off the bottoms of their shoes. And by the way, Sh-t on everyone else too!

I never owned a pet so when I moved to Italy and saw dogs walking in supermarkets, bars and restaurants I was a little grossed out.
When I walked outside on the sidewalks and had to walk around huge piles of doggie doo I was disgusted.
Perhaps a little bit of regulation for these animals is a good thing.

@J.Doe - I think we need to regulate the dog owners!

@Davide - Go read the series starting 'A Year in the Merde' -- it's hysterical.

@Liz - You mean to tell me after umpteen years with a California drought that you're worried about one yellow spot on your lawns???

Ha! If a lawn is where they are using their water and energy, all the more reason to vigorously defend it against dog pee!

I'm an American & own 2 wonderful dogs & am a very responsible pet owner; but American's are ridiculous on so many levels when it comes to pets & their homes; most own pets like they're furniture- to be seen & not heard AND definitely not to urinate! Everyone here wants their house & lawns to look like a commercial- that's why they're all uptight & un-happy! Live a little people AND let your dog pee on a tree! Americans need to stop worrying about their lawns & trying to have total control of their dogs urine & drink some wine & talk about something other than - there new crate'n barrel couch! Herein lies some reasons I too will be an expat soon...don't get me started on the germophobes out here too.