The Roman Calendar: Through its desserts

Now that it’s a new year, and everyone is hanging up every version of their calendars, I came to the realization that I really didn’t need one.  Living in Italy, you can practically set your clock to the food cycle. And I don’t mean just the in-season fruits and vegetables:  I’m thinking desserts. 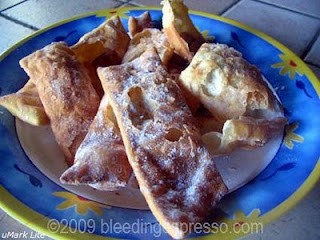 It’s January and nary a Panettone can be found far and wide.  All windows and grocery aisles are filled with the wonderful sights of Castagnole (donut holes, by any other name still smell as sweet) and Chiacchiere or Frappe (in Rome) baked or fried, in preparation for February’s carneval festivities.

By March, we’re treated to the Easter dove of peace, in the form of a sort of panettone without the raisins—if it weren’t for the great care in making these Colomba, you’d have thought they just took the leftover Pandoros and kind of squished them down just so.  They’re so delicious, though, they bring you right into April licking your lips from that chocolate frosted or cream filled treat you bought for dinner, but eat for breakfast instead.

The Colomba cake has a curious history:  they showed up in medieval times just after the Barbarians tried to take Pavia.  I don’t know what this means.  Did the locals resist by living off of yeast-type bread?  Did they make and throw large versions at their would-be conquerors?  Did they offer them up as a sign of peace? No matter, the rest, as they say, is history.

Starting in May/June, you have to start hoarding all of the Mars Bars and little Lindt chocolates like a squirrel readying for winter.  When that sun starts to melt sidewalks, well, no retailer will be carrying black gold.

Summertime of course means only one thing:  gelato to your heart’s content.  You have come to see it as both a life-saving remedy for its cooling down factor, as well as something dietetic; It surely must have fewer calories than Ben & Jerry’s chocolate chip cookie dough or Haagen-Dazs’ dulce de leche.  Every day I cop a gelato cup, I thank my lucky stars they haven’t started posting calorie counters like in New York City Starbucks.

Come September, you can meet your favorite chocolate again in its every manifestation.  You buy double just in case there’s ever another run on chocolate again; you consider making a makeshift chocolate-filled bomb shelter pantry. You just never know when the shelves will go barren again.

In November we find the first Marrons Glacé, which, they’ve now decided to wrap in cute little one-mouthful mini-packs.  Again, you believe that if you only eat a few mini-packs a day, it surely cannot be like eating a king-sized Butterfinger!  After all, aren’t chestnuts fruit?

Which brings us into December, when Panettone and Pandoro have free reign.  Not good enough to simply eat as is (with the powdered sugar ritual poured over top), Americans have come up with “Italian” French Toast (wouldn’t eat be easier to just rename it ‘Italian Toast’?  Like French fries, I doubt either group truly eats their eponymous treats).
So slice the pieces, dip in egg batter, and fry up those cakes before dousing them with maple syrup – making sure not to forget the powdered sugar over top - it's tradition.  Other serving suggestions are, swimming in chocolate fondue, or smothered in zabajione sauce. I swear it’s the Italian equivalent of Krispy Kremes.  And nothing gets better than that.

So, now that you have your calendar, you might as well start considering the New Years’ resolutions -- Now how is it that Italians stay so fit and trim?

When I was living and working in Siena (thanks to you Francesca!) I went with a coworker to her friend's house after work the evening of Christmas. (The guy and his ancestors were the caretakers of the horses that race in the Palio from that neighborhood and he lived above the stall where they keep the horse just be for the race.) He brought out a Panettone and sliced it up for us, toasted the slices, then proceeded to spread Nutella on it, saying it was a common way to eat it. Very rich and extra Yummy!

Francesca:
I'm afraid I don't think Italians know much about desserts except zabalone. There's only one thing better than a zab and that's two.

For real desserts you must go to France, Switzerland Austria, Germany and Hungary. Italy should stick to what they know.

P.S. Your link to Chiacchiere leads to nowhere.

Come to think of it, don't most European countries have similar calender dessert signposts as does Italy but much richer in flavour?

Francesca:
On second thoughts or is it thirds, I better add in Napoleons and Schweinen Ohrchen for good measure.

Well, generally, I will agree that American (read: sugar & butter-laden) treats are the best on earth. They come from that German background...so, you won't be disappointed there, either.
As for Italy, the Sacher Torte (Austrian) is now a year round dish. But for me, the best desserts of all time (here) are the Millesfoglia (try a cake of that) and cannoli. Nothing beats them, except chocolate.

Francesca:
At least we agree on one the Millesfoglie or Napoleon.

Sacher is a bit passe (can't put the accent on it--damn). No dessert can be called a dessert with bloody cheese as a filling. Yeauck!

You really must expand you palate and visit Budapest for Dobos Torte, the Castle and especially for you King St. Stephan's Dom. Now there's a challenge for you.