Not long after settling in office, Rome’s Mayor Alemanno presided over the installation of a Council for Dignity, Forgiveness & Reconciliation. Taking place at the highly controversial (if you’re the Mayor of Rome) and highly disliked (again, if you’re the Mayor of Rome) Ara Pacis Museum, I was convinced that it was his gesture toward leaving the building – and its Architect, Richard Meier, finally at peace.
Having declared the first modern building in Rome's center in nearly a century an official eyesore on the sights of stunning Rome, wanting to dismantle it, and in the best case, rebuild it in Rome’s ugly suburbs (so much for beautifying the entire city - in his eyes), I thought he descended upon the Altar to declare instead its official Dignity; to Pardon Meier for his horrific creation, and to start forward toward modernizing Rome in an act of Reconciliation. This single act would lead the way toward building something new again within the city center limits.

Turns out I was wrong. On all accounts. While the city keeps up its campaign of eye pollution in allowing the hundreds of illegal advertising billboards, while it allows the SS teams in the Parks&Gardens Office to continue razing any sign of greenery in the city (leaving behind a trail of meter-high grey tree stumps which get uprooted only for planting a billboard), this was a matter of a totally different sort.

Although it must have pained Alemanno to hold his celebration at his most hated monument, he even stood to accept a sheet of pergamon to convey the lofty ideals of respect, comprehension and dialogue. Three characteristics that do not surround his Meier diatribe (built by the former left-wing Mayor). In his words,

“One needs to search out the real reasons for conflict.” At the same time, “One shouldn’t close himself behind hate and revenge but take on the true causes.”


Now if he would practice what he preaches, maybe the fatwa against Meier can be lifted, and the Mayor can preside over a Pax Alemanno of sorts.
picture courtesy of bluffton.edu
click here to see the entire Altar & museum in its splendor

From RomanGuide: After a century of bloody civil and foreign wars that had brought to the end of the Roman Republic, Augustus, who had ruled as emperor since 27 B.C., seemed finally to have placed the Romans under his own personal peace, the Pax Augusta. In recognition of this achievement, the Roman Senate voted in 13 B.C. an altar dedicated to peace and to the emperor who had made the end of the civil wars possible. The result, completed about four years later, was a triumph. The Ara Pacis Augustae, the Altar of Augustan Peace is the most intimate imperial monument. The Ara (a 35x39 foot rectangle), is a perfect example of the elegant and gracious style cultivated by Augustus. Justly proud of his altar, Augustus made mention of the circumstances that led to its creation in his Achievements of the Divine Augustus (Res Gestae divi Augusti), the official autobiography written near the end of his long reign. 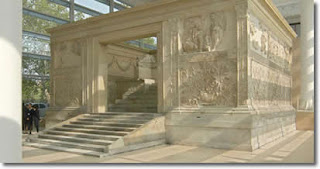 I am not the Mayor of Rome, though I am an Esthete and an Architecture fan (having seen - looked for, not by chance - major work by major architects all over the world), and I am among the many MANY other simple citizens, who TOTALLY despise the horrible job done by Meier on the Ara Pacis, a masterpiece Roman monument hidden to sight now, by an ugly structure incoherent and not even beautiful right in the middle of Rome, and allowed by the former Incapable Mayor Veltroni.
I would like also to inform that the former major modern work was not 100 years ago, but less than 20, by Renzo Piano, the Auditorium, which is a very great architectureal example.
And, anyway, again less than 100 years ago, the most wornderful modern Architecture in Rome was created, and it is in Modernist EUR and in Foro Italico, built during the (enlightened and focused on good things and beauty) Fascism, with Palazzo dei Congressi being one of my favourite buildings in the world, and Palazzo della Civiltà e del Lavoro (groviera) a total masterpiece.
I must add that, in decades, the left wing "intellectuals" have created horrors like Corviale by Arch. Fiorentini who committed suicide years down the line having seen what he had done, and allowed teh beauty of Roman borgatas, and thrown thousands of people from bidonvilles around Rome in former jewel areas like Ostia (which has other various architectural masterpieces, some of those exposed at Centre Pompidou in Paris a few years back) in the crazy attempt of making of it another horrible borgata... Thank God we are freeing ourselves up from those "intellectuals", and now more practical people, who really love Rome, are in charge.

Both the Auditorium & EUR are outside the City walls.
First modern construction (other than the Linea C of the metropolitan - and you can't even count the parking garage at the Vatican) in 100 years...

But, all said, beauty lies in the eye of the beholder. I think the museum is stunning (did you see the Valentino exhibit?)
And, the Pompidou is a '70s train wreck.