The Cat Lady Strikes Back


Everyone knows about the 'Cats of Rome', and how they are part of the urban landscape. I imagine that with increased traffic and decreased food outlets, there are far fewer than I recall as a young girl roaming the streets.  To get your cat fill, you have to migrate over to Largo Argentina, where a welcome cat colony exists, funded by donations, at least until they open up those ruins (of the Teatro di Pompey?) once again.
But I did not know, until I found this wonderful posting, that cats are so treasured in Rome, they are citizens to the full degree.  In my neighborhood, there are many cat outposts where little old ladies come and feed them; some are so well-cared for (as the ladies come in droves, un coordinated between them), that some cats are bigger than my little dog, Trevor. 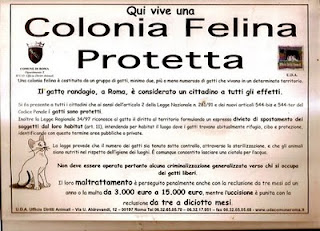 In bold, this reads, a stray cat in Rome is considered a citizen to the full extent of the law.  Italy is notorious for its millions of laws on the books that have never been erased since the time of Caligula, and so it is, a law for cat ladies.  The animals are entitled to food & water, you must remove the plastic dishes (except water bowls), keep the area clean.  Fines & punishments for anyone abusing cats or cat ladies in their mutual enterprise.  The sign must be posted but there must be some sort of tussle going on in the 'hood, as it has already been removed.

It's too bad that Venice didn't issue a similar law.  Almost all citizens and environmentalists alike agree that they wouldn't have a pigeon problem (not to mention rats & mice) if they hadn't disposed of all the cats -- Come to think of it, I've never seen one there.  There's a movement to redeploy them instead of the pesticides & culling the Serenissima - in a fit of obvious rage - is currently employing.

Given the number of 'cat citizens' in Rome, I'm wondering who was the first to enact this law. Clearly, they are looking for votes.  But where, I wonder, do these feline citizens stash their voter registration cards?

As for cats, those unfriendly beasts---Wot I say is, "giv'em a hundred yards then open up with both barrels, but you must remember to lead...LOL!"

Portuguese Water Dogs...so, you have something in common with Obama after all!

Meanwhile, please keep this in mind:

Dogs have masters - Cats have servants.

Ou contraire, he's just a copycat, not an original thought in his head...LOL!