The Red Head is Dead

Beating the heat in multicultural London, the conversation (after we've run down the archaic workings of English plumbing) inevitably turns to immigration. This and its accompanying issues (like the pros&cons of outlawing the burka) have changed the very face(s) of the country (and I don’t just mean the soccer teams).  For friends who grew up here in the day, things weren’t always so open to all and sundry.  So an Irish friend loves to quip that when he was young, signs in stores read “No dogs, no blacks, no Irish” (in that order).
To further add insult to injury, he was blessed with red hair – a sure sign of the devil if anyone ever saw one.  Red-haired villains filled the airwaves, and people were truly afraid of these Irish rogues.  I have always loved red hair, but I have never ever heard of this in American culture.  Wasn’t all-American Archie a red head?  And what about Rin Tin Tin?  And, while I’ve never liked his scary little face staring out at me on milk cartons, but even Bozo the Clown and Ronald McDonald don’t quite fit the treacherous criminal types (although they dig dig up the backyard of Gacy the clown to find all kinds of bodies).
But while in the UK this idea has somewhat dissipated with time (and the arrival of turbans), in Italy, red hair was quite the rarity.  So much so that people still think that freckled people are strange or exotic to behold like albinos and that red heads, are, simply put, nut cases.  If a red headed boy is acting wild, just because he’s a 9 year old with a lot of energy, they’ll blame it on the hair color. 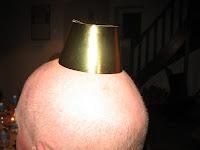 While I think red headed people are generally the most stunning form of homo sapiens, I’ve always gotten a big kick out of this; but I have wondered how it affects the self-esteem of those in the Bel Paese.  Do mothers stop and think ‘where did I go wrong’?
As for my friend, he lost most of his hair by the 1980s – just when every villain in every TV show and movie was depicted as – a bald guy.