While there's so much (justifiable) talk going on across the country of the draconian law that would totally inhibit freedom of the press (including bloggers) to the point that writing about democracy in Burma or Iran would be less threatening, I'm for making a specific clause against all Furniture advertisements - forever.  In a democracy, one could say that they are offensive to the entire population, except the proprietor of course, who generally features in the ad.

Or, in the very least, until they actually paid for a proper ad agency to come up with their ads, to be submitted to a blind panel for voting -- very simply - like / dislike, just like on Facebook.

That way, we would avoid some of the worst eye pollution this world has ever seen. 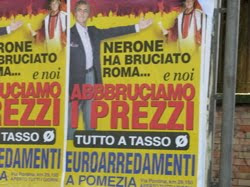 This ad is so appalling on so many levels that my camera lens broke when I took the shot.  But, as a sort of Case Study for all you students out there of marketing communications, we can list the ADVERT DON'TS for you:

For more incredibly outlandish bad ads - in the furniture industry, go here.
I rest my case.

to add to your points: where is the branding? Or is the proprietor the brand?

I guess it all depends on their target market/audience. Higher end shops certainly do not do this type of advertising.

Wow. I hadn't even noticed THAT. I'm going to half to lower my Ad Age to about 3 1/2 - since they also don't know how to spell!
I do not - I repeat - not subscribe to the idea that the masses cannot be marketed to the same way as say, Armani does.
In fact, it's what made Nike what it is today.

In fact, the verb 'abruciare' by itself does not exist :) It all comes down to the will of replicating the contemporary Roman accent by adding an 'a' in front of the verb and by using more than one 'b'. Examples like 'annamo' (andiamo - let's go) and others prove it. Appalling, still :D