Rome's mini-wikileaks - and all the Censor's men

Julian Assange may be praising the British judicial system, but, I'm sure he's lucky he didn't find himself in Italy.  Rome's judges, clearly on the wrong side of the internet freedom fighters, have, almost overnight (in an unprecedented act of swift decisiveness) closed down Cartellopoli - "Sign City" - a blog that exposed all of the outdoor signs that are springing up like mushrooms all across Rome - illegally.  Thing is, Wikileaks posts ill-gotten information; Cartellopoli posted photos of items already in the public domain - in fact, they're public eyesores.
Citing that the website "instigated vandal acts" - without absolutely the slightest hint of irony - as to which vandal acts they were actually protecting - the website was shut down.  This site, like others such as, Roma Fa Schifo ("Rome Sucks"), is run by democratically-minded people who are sick & tired of seeing the world's most beautiful city reduced to one live message board; with every sort of ad, poster, and of course, huge outdoor sign littering the cityscape.
Their activism - to get people to notice the daily disturbances and 'wild west' practices - embarrass the companies and people that are committing these vile acts - and maybe, elicit a response from the authorities.  Little did they know that they would be the ones to receive such a direct response.
Naturally, these same civic-minded people have been waiting years for a case to be brought against any one of the illegal operations busy polluting the streets of Rome, and of course, engaging in the local pastime, not paying the taxes for posting in the first place.  But their website?  Down for the count.
They now must fight to get the site reinstated.  If, in this giving season, you love Rome, believe that (legally) disseminating information is a form of civic and civil discourse, please contribute something to Cartellopoli - to help pay their legal fees to stop this censorship and block the march of progress by self-serving outlaws.  And in the meantime, it will go a long way to bringing Rome back to its unparalleled beauty.

You can donate thru paypal on the Roma Fa Schifo site:  http://www.romafaschifo.com/

You can read the article (in Italian) about Cartellopoli's censorship here


Wouldn't it be nice to see instead, signs like these around town? 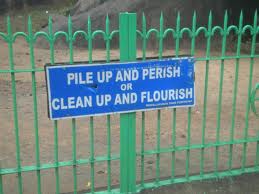 re: the ice skating in your Dove Sono? section, do the Italians actually share shoes or do they have to bring their own?