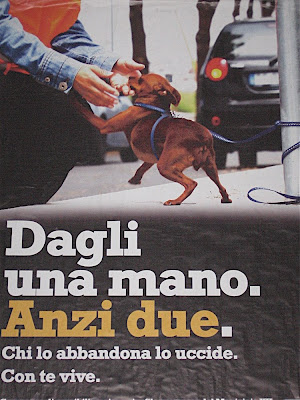 August 1st. The Official First day of Summer for most Italians. It marks the day in which shutters go down, ‘closed for vacation’ signs go up, and streets go empty for one whole month. But, it also marks the day in which over 300,000 dogs, sitting on death row, can no longer count on having their death sentences commuted just one more season. They didn’t know it, but since being given as gifts at Christmas, they’ve been living on merely borrowed time.
As a dog-owner (having rescued an abandoned dog five August’s ago), I find Italy to be the most dog-friendly country on earth; after all, they’re accepted in restaurants, stores, hotels, taxis, heck—I even take little Trevor to concerts and Museums! Each October 4th, in honour of St. Francis, churches even hold special masses for your animals—in attendance.
But, in what is one of the many contradictions of this wonderful place, when surf’s up, and the days grow long, well, Italians figure that it’s a good time to dump their best friend at the side of the road, hoping he’ll get ‘picked up’. He usually does—by the front bumper of an SUV going 95 miles an hour.
The Italians (and they do not have the corner on this barbarian trait, as the problem is rampant throughout the Mediterranean), simply don’t consider animals as ‘pets’. They are beasts-- and no amount of unconditional love, company and dedication will change the fact that they can be disposed of as an empty pack of cigarettes--tossed carelessly out a car window.
While many of us animal lovers fret over the annual great dog massacre, some activists and City officials thankfully try to do something about it. Usually, by putting up poignant posters showing sad little doggies abandoned to meet their fate. This year, however, I noticed an even sadder new trend in the campaign.
Instead of running ads trying to depict these unconscionable owners as the true beasts that they are, this year’s ads say, ‘Give him a hand…or maybe two’.
In short, they’ve given up on trying to solve the problem at its roots and are now trying a ‘Save the Animals’ campaign; pleading with the rest of us to adopt the poor creatures we’ll find chained to lamp posts or criss-crossing major highways, before they starve to death or are mercifully hit. But even this campaign falls short. Each year, abandoned dogs cause nearly 7000 highway deaths (to humans) as cars swerve to avoid them. Wouldn't that have an impact on the rest of us?
As for me, another August spent in the city means running across motley packs of newly wild dogs: Poodles, golden retrievers, Dobermans, Beagles and every other mix of breed in between…it’s almost a charming scene right out of 101 Dalmatians, except for one thing: they don’t get saved in the end.

This is so sad. I remember finding out about this terrible annual tragedy the first summer I lived in Italy (1994). My Italian wasn't great yet, and because the concept was so foreign and appalling to me, I wasn't sure that I was really getting the message (don't abandon your dog!). In the end someone explained that no one wanted to pay the fees to board their dog so they just abandoned them when they went on holiday. I'm sorry to hear that in the last 13 years the habit hasn't diminished...e' un vergogna veramente.