Driving in Italy: Your Midnight Run 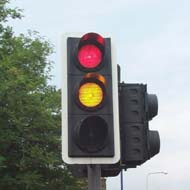 The one great thing about staying in the city thru August is the lack of traffic. What usually takes 45 mins on a good day (plus another 20 to find parking), becomes a swift 15 mins in the summer. But, while one might think that with fewer cars, driving is actually in some way better or safer, think again. Because it’s during the lonely month of summer, when everyone starts running the red lights, pulling U-turns when you least expect it, and driving at top speeds that, even if they managed to see you in their path, they wouldn’t be able to stop their vehicle in time to miss you.

So, actually, while with the heavy traffic you can be sure that people are sort of lulled into obeying the traffic rules, in August, anything goes. I make it a point (in August) of never ever running a yellow as it’s about to change -- because I know there is an entire fleet of motor scooters and cars already jumping the green on the other side.

And if that’s not enough, in an attempt to make everyone cautious, at midnight (year round), all the lights start flashing yellow. This is actually an excellent idea. Somewhere down the line, someone clued into the idea that at night, with very little traffic, people were running the reds and making the guys who innocently sped through the greens a statistic.

But, the idea would be a bit better if they were yellow on one side and perhaps flashing red on the other side. So, one knew or, in the very least, believed, that the other guy has to stop before throwing his 2000lb vehicle into oncoming traffic. And if they ran the red, at least it’d be a lot clearer to the police who was at fault for not stopping.

So, basically with both sides flashing yellow, instead of making everyone cautious, the effect turns out to be the exact opposite. No macho guy (or gal) worth his salt is going to look like the jerk who actually slowed down, of all things. Intersections turn into a free for all game of cat and mouse, except it looks a bit more like Tom&Jerry [actually, I think it’s a bit more like Wyle E. Coyote and the roadrunner—but without the Acme instant spring kit on the wheels of your car].

In short, while racing through the streets of Rome is wonderful during the day, at midnight it’s not the Werewolves you need to fear, it’s the Formula 1 Wannabees.