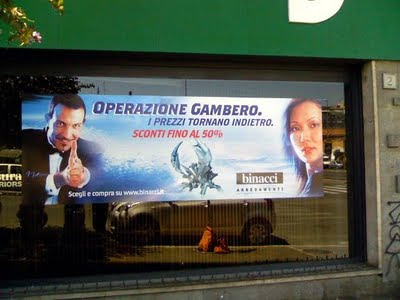 It’s been almost two years since I started this blog, and since that time, I’ve longed to have a special column, replete with my rating, of the ridiculous ads which litter my field of vision here in Italy. Now, I’m sure every other country on earth has pretty stupid ads, but, it just seems to me, that there’s an immense wealth concentrated here in a country that prides itself on putting its best face forward (La Bella Figura). Every time I go to London I actually stop to take in all of their brilliant ads before proceeding to the next swathe in the tube station.

So, to start out what will be a regular feature in the left hand column, of course, I have selected what is probably the worst ad campaign in the history of advertising: Binacci Arredamenti. This guy is so in love with his looks, and that of his wife? lover? secretary? he regularly features himself on every single ad, one cheesier than the next.

They go in themes, running the gamut from a Star Wars (complete with light sabers) series, to James Bond (with the Asian lady looking a whole lot like Lucy Liu), and everything in between.
One guy commented in the blogosphere that the ads are so abominable that the company should be sued for eye pollution.
His latest campaign, in an effort to appear less insipid, actually deviates from this course offering us all a breath of fresh aria, of sorts. He has spared us one of his ‘come hither’ looks while the babe vapidly looks on. Instead this summer, he’s decided to desecrate Rome’s most beloved monuments with his sorry attempt at witticism. 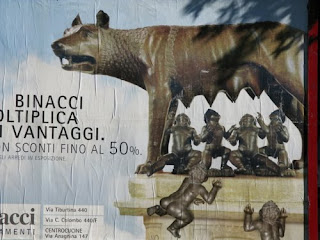 One trip over to his Ad agency’s site, who, even more unbelievably actually claim to be the brains behind this barrage of garbage, and you can see what we’re dealing with. Their home page is so weak, you cannot, without aid of a magnifying glass that would burn envy in even Galileo, read what they offer. So much for mass communications.

I have devised a ratings scale: 1 (infantile) to 45 (at the peak of brilliance), following basically, the likely age in years of the person who created the ad.


Some quotes from the blogosphere:

Francesca:
I hope you didn't put my videos into that low a classification. You've watched all of them right?

after watching the first two ads, the one with Rome monuments looks just great.

just added to my blogroll!