Driving in Italy: Not for the weak of heart 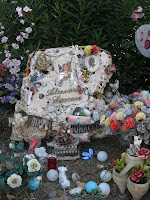 I recall while on family trips Up North Michigan, every so often, and usually near a fork or exit ramp, you would spot totally smashed cars lying there as if cast off from some end of the world flick like I Am Legend.
My dad would tell us (as he put a faux police light atop the car and pressed the pedal to the metal), that it was to deter people from speeding. Obviously America, a country founded on bloodshed, needs to shock and awe people into taking action. Talk about scared straight (although that could have come about from our own attempts at breaking the sound barrier).

In nostalgic Italy, in what is at first unsettling, but then totally awesome in its commemorative appeal, Italians mark those hard bends, merges and major intersections with spontaneous flower memorials – infinitely more heartfelt than grave markers (out of sight, out of mind). As you wind along the roads of Italy, in bustling city centers or along the countryside, you’ll find flowers wrapped on the side of the bruised tree, or around the odd bent pole. You think of the person whose spirit sailed away that day, and, if you’re wise, you slow down a bit.

And, although it doesn't seem to have quite the same effect on drivers, I find these memorials so eloquent in their simplicity -- they literally drive the point home far better than leaving auto carcasses strewn along the roadside.

It doesn't limit itself to road accidents. I took the Chair Lift at Scanno in Abruzzo a couple of weeks back and there was a lone ski propped up against one of the support towers along with an arrangement of flowers. Perhaps it's there to remind people to be careful when on the slopes.


P.S. You're too young to remember.

@Thumper: no, someone lost a loved one there for sure -- I was just in Scanno, too! Lovely.
@Davide-you're right, unless it's the song about the baby I'm thinking of.