Italy Travel Edition - What to do on holiday

Perusing my photos of one terrific summer, I thought I’d give you a brief recap of all the wonderful things there are to see and do in Italy, not that any of us thought otherwise. After all, we endure the petty inconveniences I write about in my blog, because they are made up for them in spades by the stunning beauty and wonder of such a country. So, even if you stay in the boot for August holidays, you will not be disappointed.

Although I missed out on my usual summer fare of open air concerts and cinema, I still beat the heat with Gelato in the Garbatella – it doesn’t get much better than this, with the tastes of Dark Chocolate, Tutto Nutella (basically, frozen nutella) and Apple & Cinnamon (admittedly, a very American taste) and delicious Mango on offer.

The Capitoline Museums – with the refurbishments, the history, and the excellent displays, we stayed all day.

The Colosseum – although the Vespasian exhibit wasn’t as promising as it would have made us believe, back inside the Colosseum was still exciting after all these years. But, for all, the Rome Rewind 3D show was more fun than any of it.

Of course, no visitor to Rome leaves without seeing my favorite museum, the ACEA Montemartini electric plant – juxtaposing 1st century statues with the huge generators which once lit up Rome. It is truly a sight to be seen. And, with no visitors, you have the place to yourself (with the exception of being shadowed by the totally bored guards who follow you as if you were going to sneak a 6 ft. high, 2 ton solid marble statue under your shirt on your way out the door). 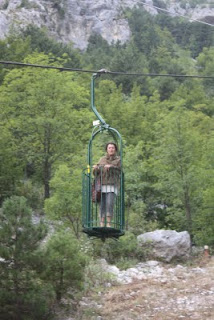 Isola Tiberina – where you can lounge on comfortable couches like Emperors in days of old at any one of their riverside bars & restaurants and enjoy the people watching.

An Angels & Demons Walking Tour around Rome – even though I can’t fathom Dan Brown as good literature, he can at least tell a (fairly) good story.

And finally, visiting the Abruzzo where we explored an amazing cave, the Grotta del Cavallone, after having driven around gorgeous, winding roads, straight out of central casting for a car commercial, to discover this grotto – the highest cave around (see photo). We visited charming towns of Civitella Alfedena, Roccaraso, and Fornelli (a walled borgo). Interspersed with outdoorsy things like paddle boats around the stunning scenery of Lago di Barrea and trekking up those terrific hills.

But, to top it all off, a stay in the Sabine Hills with good friends, children playing, daily BBQ parties, pools and people and dogs of all ages coming and going -- need I say more? A good time was had by all.

Coming soon: The other side of the coin of tourism in the Bel Paese