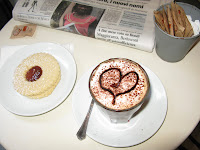 150 years ago today (March 17th, to be precise), Italy became a certified nation.  And this year, the nation couldn't be more proud to celebrate in style...Or, as Roberto Benigni said, making his entrance on a white stallion, "Italy is still a young country -- in fact, she's underage!"

And, the benefit of living in the nation's capital, you could tell the city pulled out all the stops.  Hundreds of events, concerts, light shows, fireworks, museums were free - and open until late -- even the Senate was open til 2am (with Senators likely hanging around for the hotties on ecstacy to turn up, I'm sure).  Strangely, like a wrinkle in time, it all took place - the night before.

On the nation's day off (except all those museums and coffee shops) instead, you had to pay for entrance to the museums and shows, and the Senate was closed.  From what I could tell, only the illegal parking attendants got the day off -- that's because the city had cordoned off every single parking place available in all of Rome, for no apparent reason other than to keep people from wandering the city streets on their free time.
Add in the rain and we ended up turning back home (but not before exploring the wondrous Capitoline Museums and grabbing a terrific lunch atop the stupendous Vittoriano monument).

Rome's Professional Women's Assoc hosted an evening with a historian who showcased the intrepid and gutsy women of the Risorgimento (the multi-year, multi-battle fight for the Unification of Italy), including American-born Sarah Margaret Fuller, one of the earliest feminists on record.  But the Italian media got the upper hand -- who better to portray the brave Brazilian, Anita Garibaldi, 6 months pregnant with her fifth child and who fought side by side, from Sicily to Venice and back again with her husband and freedom fighter, Giuseppe Garibaldi?  Argentinian Supermodel Belen -  I guess the logic is, they're both Latinas.
Clearly, it takes pure heroics to be in a relationship with convicted sleezeoid paparazzo (serving jail time for extorting 'prospects' for his ill-gotten photos) Fabrizio Corona - and of course, surviving as a 'reality show' guest on the Italian version of Survivor, 'L'isola dei Famosi'.
Now that Italy is 150, could she please grow up?

this morning I stumbled upon your nice blog. I am a licenced Counselor who works with expats and English speaking foreigners based in Turin / Piedmont. Web site: www.counselinginenglish.it.

As counseling is a useful service for the expat community I'd like to ask you to give me some plug on your site or to simply pass on the information to anyone who may be interested. Regards, Piergiulio